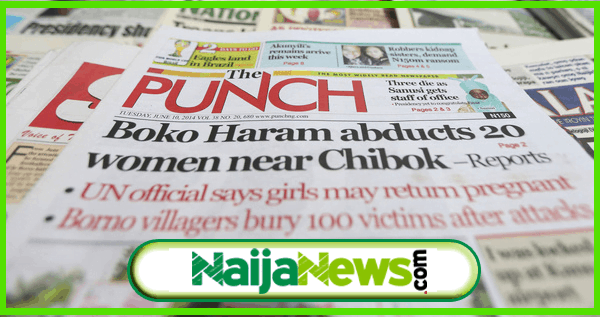 The PUNCH: The presidential candidate of the Peoples Democratic Party, Alhaji Atiku Abubakar, has come under fire following his advice to Northerners that they should vote for him in the 2023 election because he hails from the northern region. Atiku, who stated this during an interactive session with the Arewa Joint Committee in Kaduna on Saturday, told his audience not to support a Yoruba or Igbo candidate in reference to the presidential candidates of the All Progressives Congress, Bola Tinubu and his Labour Party counterpart, Peter Obi

The Guardian: Every minute, more than six Nigerians enter the extreme poverty bracket as the number of poor persons in the country race towards the 95.1 million projected this year by the World Bank. According to the World Bank, in its latest 2022 Poverty and Prosperity Report, Nigeria contributed three million people to global extreme poverty, while the country is “home to a large share of the global extreme poor.”

This Day: The Atiku Abubakar Presidential Campaign Organisation, yesterday, said Nigeria did not need a leader, whose idea of development was to move the country from a rotten to a bad state. It was a reference to the presidential candidate of the ruling All Progressives Congress (APC), Asiwaju Bola Tinubu.

The Nation: Statesmen, politicians, ethnic nationality groups and the Presidential Campaign Council of the ruling All Progressives Congress (APC) yesterday chided Peoples Democratic Party (PDP) presidential candidate Atiku Abubakar for what they described as fanning the embers of disunity.

Daily Trust: There are indications that the implementation of Steve Oronsaye’s Report on the restructuring and rationalization of federal government ministries, departments and agencies (MDAs) may not happen anytime soon despite the recent presentation of the white paper report to that effect as an analysis of the 2023 budget showed that over N206bn was voted for some of the agencies recommended for scrapping.

Thank you for reading, that is all for today, see you again tomorrow for a review of Nigerian newspapers.