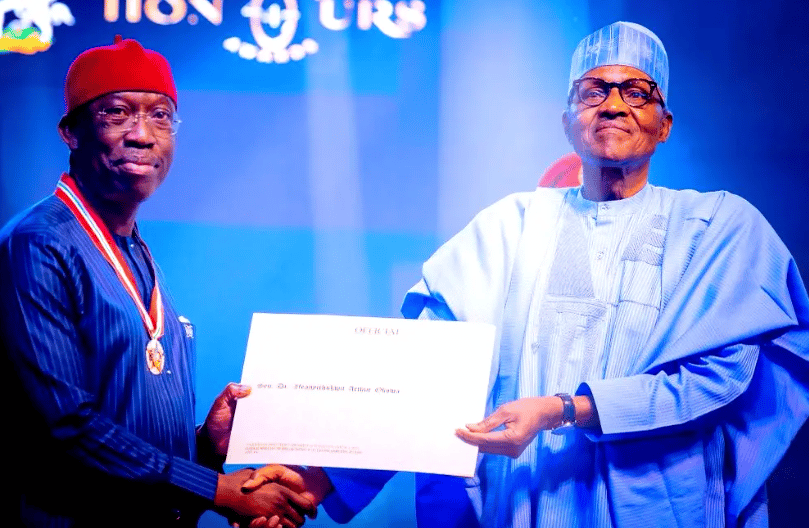 Welcome to the round-up of the latest political news in Nigeria, political gist, highlights of political events, and happenings in Nigeria for today Wednesday, 12th October 2022.

Read all the major political news, political event highlights, and happenings in Nigeria for today on a single page right here.

Supreme Court To Give Verdict On Delta PDP Governorship Ticket On Oct. 21

The Supreme Court has on Wednesday scheduled judgment on the dispute over who should be the candidate for the next governorship election in Delta State on the platform of the Peoples Democratic Party (PDP) for October 21. Naija News reports that a five-member panel presided over by Justice Amina Augie announced the date after arguments from lawyers of parties in the appeal filed by David Edevbie against the August 29 judgment of the Court of Appeal, Abuja. The Court of Appeal had, in its judgment reversed the July 7 judgment of the Federal High Court, Abuja which voided the nomination of Speaker Sheriff Oborevwori. Oborevwori came first in the party’s governorship primary held on May 25, but Edevbie challenged Oborevwori’s nomination, claiming that he (Oborevwori) submitted false documents to the PDP, by virtue of which he ought not to be allowed to participate in the primary. Read more.

Reports have emerged over an alleged fresh plot to remove the Independent National Electoral Commission (INEC) Chairman, Professor Mahmood Yakubu before the 2023 elections. The Coalition of United Political Parties (CUPP) has raised an alarm over the allegation of Yakubu’s removal, saying the move is to undermine the 2023 general election. Naija News gathered that the coalition, which made the allegation during a press conference on Wednesday in Abuja, comprises the majority of the opposition political parties in the country. According to the CUPP Chairman, Ikenga Ugochinyere, who spoke on behalf of the opposition parties, the coalition had also discovered fresh plots to deactivate the Bimodal Voter Accreditation System (BVAS) from being used in the election and ultimately stop the electronic transmission of results at the polls. He alleged that the plot was being planned by a top member of the ruling All Progressives Congress(APC) in the South-East region of the party. Read more.

A meeting between the presidential candidate of the All Progressives Congress (APC), Bola Tinubu, Governors of the party, members of the National Working Committee (NWC) and Presidential Campaign Council (PCC) aimed at putting all the controversy surrounding the campaign list of the party is currently underway in Abuja. The meeting which has been on for a few hours is taking place behind closed doors. Naija News reports that the 422-member campaign list initially released created bad blood within the party. In attendance are the presidential candidate, Asiwaju Bola Ahmed Tinubu; vice presidential candidate, Senator Kassim Shetimma; members of the NWC led by Deputy National Chairman (North), Sen. Abubakar Kyari; governors of Ondo, Ogun, Lagos, Kebbi, Kano, Jigawa, Kogi, Niger, Kwara, Nasarawa, Plateau, Borno, Ebonyi; Comrade Adams Oshiomole; Deputy Director General (Operations) Hajiya Usman; Deputy Director Geberal (Admin) and Secretary, Hon. James Faleke. Today’s meeting was a follow-up to last week’s tripartite committee meeting aimed at harmonising the party’s campaign council list. In a Punch Newspaper report, a source who pleaded anonymity said the meeting was expected to hold for two hours but added that it was likely to extend to four hours, adding that the final council list would be concluded. Although the agenda of the meeting was not disclosed, the sources said the candidate has decided to take the bull by the horn by inviting all stakeholders of his campaign including those who were aggrieved over the exclusion of their nominees from the initial 422-man list of the council to a political roundtable. Read more.

The Independent National Electoral Commission (INEC) on the 28th of September, 2022 lifted a ban on the 2023 presidential campaign. Following the directives of the electoral body, the Peoples Democratic Party (PDP) in its effort to take over power in 2023 has inaugurated its presidential campaign council and commenced its campaigns. However, the likes of the All Progressives Congress (APC), Labour Party, and New Nigeria Peoples Party (NNPP) 14 days after the ban on the campaign was lifted have failed to commence their campaign. The ruling party, APC has been held back over the grievances of some party members on the composition of the list of the presidential campaign council. Some governors and members of the National Working Committee (NWC) of the party are not pleased with the campaign list which was released by the secretary of the APC Presidential Campaign Council, James Faleke. Some governors claimed that their nominees were not included in the campaign council. Read more.

The presidential candidate of the Peoples Democratic Party (PDP), Atiku Abubakar, has said that the National Honour of Commander of the Order of the Niger (CON), conferred on his running mate, Governor of Delta State, Ifeanyi Okowa, has vindicated his preference of the governor over other choices he had. Naija News reports that Okowa was among four hundred and forty Nigerians conferred with prestigious awards by President Muhammadu Buhari on Tuesday at the International Conference Centre (ICC) in Abuja. Reacting to the development, Atiku in a terse statement via his social media page, congratulated the PDP governor on his national honour. According to him, the award was another piece of evidence that he was right to pick him as his running mate amongst other choices. Read more.

The Governor of Rivers State, Nyesom Wike on Wednesday announced the appointment of 28,000 persons into various political offices. The appointment was contained in a statement by his spokesperson, Kelvin Ebiri. The statement noted that all the appointments are with immediate effect. Naija News reports the fresh appointment comes barely twenty-four hours after the Rivers State Governor appointed 14,000 Special Advisers, as well as 319 Ward Liaison Officers and 40 Local Government Area Liaison Officers. The statement by Ebiri added that Governor Wike also set aside N1 billion to support victims of flooding in the state including those affected in Ahoada West and Ogba/Egbema/ Ndoni local government areas (LGAs) of the state. Read more.

Nigerian music producer cum politician, Olubankole Wellington, popularly called Banky W, has opened up on why he joined politics despite being a successful entertainer. According to the singer, he joined politics because that was the only way to change systems that were not working, and also to make a difference beyond political activism. Banky W, who disclosed this on Arise TV’s The Morning Show stated that “we must engage with the system from where it is and fight for what we stand for and what we want to happen.” The singer, who is the Peoples Democratic Party (PDP) House of Representatives candidate for Eti-Osa Federal Constituency, remarked that the longer the young people sit out from mainstream politics, the more the dysfunction would remain. He continued saying, the real opponent in Nigeria is apathy adding that more Nigerians sit out from the political process in fear of the power of godfathers, and the despised old order will remain. Read more.

The presidential candidate of the Labour Party (LP), Peter Obi, has said the issue of security is the number priority in the country. In an interview with the BBC aired on Tuesday, Obi said the rising level of insecurity requires must be decisively dealt with by the Federal Government and all Nigerians. The former Governor of Anambra State said that addressing insecurity will tackle both price and food inflation in the country. Read more.

2023: Why I Was Not Included In APC Women Campaign Team List

The Women leader of the All Progressives Congress (APC), Betta Edu, has said she was not included in the list of the women’s campaign team because of her position in the party. Naija News reports that the ruling APC had recently released and inaugurated members for the women presidential campaign team chaired by the wife of the party’s presidential candidate, Oluremi Tinubu. The wife of the APC vice-presidential candidate was also listed as Co-chairman, while the First Lady, Aisha Buhari was named as Grand Patron. Speaking during an interview on Channels Television on Tuesday, Edu refuted claims by a support group in the party that she was excluded from the list. The former Commission for Health in Cross River State said it will be abnormal for her name to be listed on the party’s women campaign team under another person. The APC women leader said her role is to supervise activities for the presidential campaign because she is the number woman in the party. Read more.

A former Deputy Governor of Sokoto State, Mukhtar Shagari has revealed why he rejected the offer to be the running mate to the presidential candidate of the Labour Party (LP), Peter Obi. Shagari disclosed he was contacted to be the vice presidential candidate of LP in the 2023 general elections, but he rejected the offer. He noted that as chieftain of the Peoples Democratic Party (PDP) he believes LP can’t defeat PDP in the forthcoming election. Shagari stated this while speaking during an interview on Channels TV on Tuesday. The former Deputy Governor further stated that the party of the former Governor of Anambra State has no presence in Sokoto where he hails from. Read more.

The Director General of the Obi-Datti Presidential Campaign Organisation, Doyin Okupe, has said the obidient movement has gone beyond ethnic and religious sentiments. Naija News reports that supporters of the presidential candidate of the Labour Party, Peter Obi, are known as ‘The Obidients”. Speaking on Wednesday during the Pre-Campaign Press conference of the party in Abuja, Okupe said the movement is beyond religion and ethnicity bias, asking the opposing parties to stop linking the movement to a particular tribe or faith. Okupe asserted that the All Progressives Congress (APC) has shown that it lacks respect for Nigeria’s religious diversity following its choice of a Muslim-Muslim presidential ticket. The former presidential aide added that the party cannot justify or defend such an action because it does not care about Nigeria and its citizens. Read more.

The Independent National Electoral Commission (INEC) has announced the removal of 2.7 million voters from its database over double and invalid voter registrations. Naija News reports that the INEC Chairman, Mahmood Yakubu, stated this on Tuesday at the National Endowment for Democracy event in the United States. Yakubu disclosed that the electoral agency has conducted a comprehensive clean-up of the registration data using the automated biometric identification system (ABIS). He said following the suspension of the Continuous Voter Registration (CVR) exercise, INEC removed those who registered twice, those who are underage, and those who had no reason to register as provided by law. Read more. That will be all for today. You can read more political and other Nigerian news on Naija News