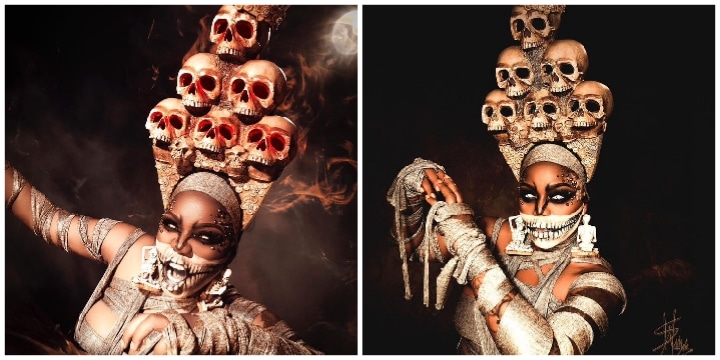 Fashion entrepreneur and celebrity stylist, Toyin Lawani has reacted to a a follower who questioned her Halloween costume.

The fashionista who partook in the Halloween celebration on Monday 31st October, shared her creative attire on her Instagram page which stirred various reactions. The stylist wore an Egyptian Mummy costume alongside objects that appeared like human skulls on her head. Some of Lawani’s fans commended her ingenuity while others obviously weren’t pleased with it. An Instagram user identified as Chidera6981 who wasn’t impressed by Toyin’s outfit dropped a discouraging comment that caught the fashion queen’s attention. She wrote: “All this because of fashion hmmm” Toyin however gave a subtly clap back. She wrote: “I breathe and live fashion so to me it’s a piece of cake, but to you, it’s headache.”

Rihanna Hails Tems On Her Role In Black Panther

Popular Barbadian-American singer, Robyn ’Rihanna’ Fenty has hailed Nigeria’s Grammy-nominated singer, Tems, on Friday. Naija News reports that the beauty mogul is making a big comeback with Tem The song is a lead single for the “Black Panther: Wakanda Forever” soundtrack and was co-written by Tems, Rihanna, Ryan Coogler, and Oscar winner Ludwig Göransson to honour the life and legacy of the late Chadwick Boseman who died from cancer in 2020 at the age of 43. Taking to her Instagram, Tems shared the cover design for ‘Lift Me Up’ revealing that she is blessed to be part of the project.s.s in the new single titled “Lift Me Up.” She wrote: ”Blessed to have written this song in honour of Chadwick Boseman and even more blessed to hear the baddest @badgalriri voice it to perfection.” Rihanna in response replied: “It’s the pen for me. Love to you sistren.’