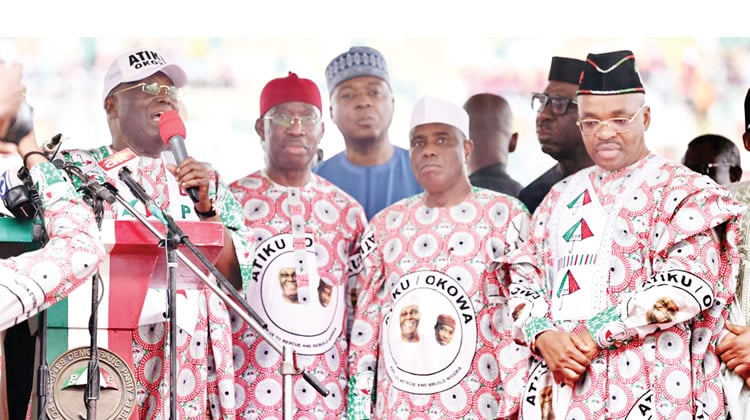 The Director General of the Peoples Democratic Party (PDP) Presidential Campaign Organization (PCO), Governor Aminu Waziri Tambuwal of Sokoto state has dismissed reports that the organization has suspended its campaign.

Naija News reports that speculations had emerged on Wednesday claiming that the PDP and its presidential candidate, Atiku Abubakar, had suspended its campaigns in order to concentrate on appealing to aggrieved party members led by Governor Nyesom Wike of Rivers State. The report had also claimed that Atiku recruited the services of former Delta State governor, James Ibori; former Senate President, David Mark; and former Rivers State Governor, Peter Odili, to appeal to the aggrieved members.

Reacting in a statement on Thursday signed by his Media aide, Mohammed Bello, Tambuwal, who also doubles as the Chairman of the Nigeria Governors Forum (NGF) and the PDP Governors Forum said that to the contrary, the campaign train “is continuing, by the grace of God on Monday in Kaduna.” Tambuwual further said he “was amazed and taken aback last night when I saw on social media and on very many platforms that we’ve called off our campaign. “That is far from the truth. In fact, it is fake news. People are looking forward to our coming to states, capitals and villages because PDP is the party to beat in 2023. “Other parties are afraid because they have not started (their campaigns). None of them have composed their campaign councils, not to even talk of starting. “They are trying to throw spammer at our works.”

Speaking further, the Sokoto Governor stated that the campaign team will replicate the kind of scenario it had in Uyo, Akwa Ibom state and where thousands of party supporters turned up for the presidential campaign kick off. He said: “They will not succeed. It is one of those shenanigans when you see a party doing well and it’s candidate is better than yours. What you begin to do is to cause mischief. “It is not going to work. We’ll run our campaign, as I said before, it is going to be issue-based. We believe there are sufficient problems bedeviling our country. “I believe in the candidature of Atiku and Okowa. I also believe that when we get there we shall do better for Nigeria; and, we hope we are able to convince Nigerians to vote for Atiku/Okowa come February 2023.”