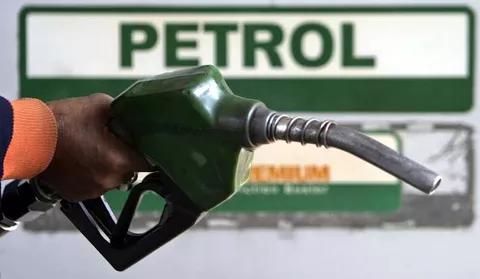 The price of petrol at the pump jumped to between N162 and N164 per litre on Thursday following Wednesday’s hike in ex-depot price.

Both actions attracted outrage from Nigerians who are still reeling under the debilitating effect of the COVID-19 pandemic.

A NAN correspondent who monitored the sale of petrol in Ikeja, Agege, Maryland, Egbeda and Iyana Ipaja axis of Lagos State, observed that some major marketers were selling petrol at N161 per litre.

Some filling stations owned by Independent marketers dispensed the product at between N162 and N164 per litre, depending on their location.

He said: “I usually fill my tank once a week and I was supposed to fill it on Tuesday but I was unable to and I had to buy fuel at N162 today.

“I believe the increment is high, because last week, I bought fuel at N148 per litre. Government should please look into this because it will affect everybody”.

Another motorist, Mr Taiwo Balogun, said as a private cab operator, he increased his fares to meet with realities in the country.

He said he usually picked people from Ikeja to G.R.A for N150 but increased the fare to N200 per passenger due to the new price.

The Nigeria Labour Congress (NLC), the Trade Union Congress and other labour groups have condemned the new regime of electricity and power rates.

Chairman, Senate Committee on Sports, Obinna Ogba, said the increases in electricity tariff and fuel price at a time the economy was yet to recover from the effects of COVID-19, showed that government is highly insensitive.

Ogba said: “The country and indeed the whole World is facing serious problem right now because of the Coronavirus pandemic. Therefore, these increases are not good at all.

“The government is just showing insensitivity to the plight of Nigerians because by increasing the pump price of petrol and electricity tariff, the suffering of the people will become worse. The whole thing is not funny at all.

“You cannot put the blame on the agencies because there is no way any of the agencies can increase the price of its commodity or service without first getting directive from the leadership of the country.”

Country director of the organisation, Ms Ene Obi, in a statement said: “We are not out of COVID-19, a lot of citizens are losing their jobs , people are getting poorer, more responsibility with school closure, young people roaming the streets unemployed and fuel hike at this time is shocking.

“Governance is about the people, instead of dealing with insecurity, we are taking actions that will further heighten insecurity because as the inflations go up and more people are plunged into poverty, there will be more conflict in our society.

“With the volume of energy we have in the country, it is disappointing that we are still not refining crude locally.”