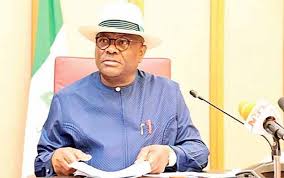 RIVERS State Government has said the administration of Governor Nyesom Wike will not hide its disposition at ensuring that any friend or associate of the Wiki political system who quits joining perceived enemies of the system relinquishes the benefits of the system.

New Rivers State Commissioner for Information and Communication, Chris Finebone, who stressed this on Monday in their maiden media briefing noted that Governor Wike would finish his governorship task on a high despite attempts by the opposition to disparage his image and performance.

Finebone stated, “Recently, there were attempts by some persons to deploy disinformation and misinformation to tarnish the image of the governor before Nigerians. It is important to state that if a friend decides to turn enemy, he or she has voluntarily relinquished all privileges friendship brings.

“You cannot call off your friendship and still expect the largesse that arises out of that friendship to still be available to you. Who does that? Similarly, if a wife decides she will no longer remain in her marriage, tradition demands that such a wife and her family return the bride price.

“She cannot call off her marriage and still keep or wait to be told to return the bride price. No amount of propaganda can upturn this fact. When the friend of a system suddenly turns a foe, the system naturally activates its defensive mechanism to ensure its self-preservation.

“Wike is the head of the government of Rivers State until May 29, 2023. It will amount to the gross shirking of responsibility for the government to sit and watch any passerby throw punches of mischief at him without adequate, and quite possibly, an overwhelming response.”

On the other hand of Wike’s commitment to finishing on a high, Finebone emphasized that “Part of the strong ending is to ensure a properly planned and executed handover by all government Ministries, Departments, and Agencies (MDAs) is done. This will be at variance with the zero handovers by the last administration in the State in 2015.