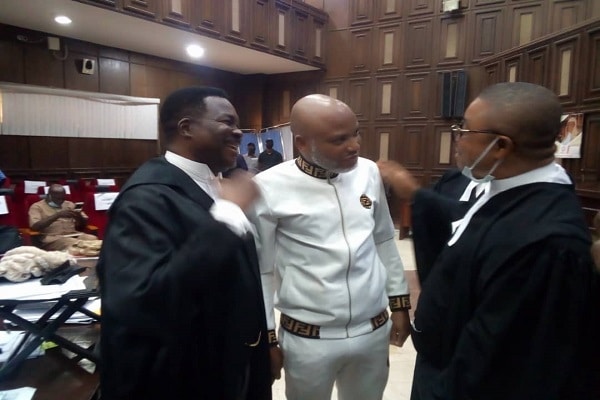 The special counsel to the detained leader of the Indigenous People of Biafra (IPOB), Nnamdi Kanu, Aloy Ejimakor has reacted to a statement credited to the Minister of Justice and Attorney General of the Federation, Abubakar Malami (SAN), over the discharge and acquittal of his client.

Naija News had earlier reported that a Court of Appeal in Abuja on Thursday struck out charges levelled against Nnamdi Kanu by the Federal Government. The Court of Appeal ruled that the Federal Government breached all local and international laws in the forceful rendition of Kanu to Nigeria, thereby making the terrorism charges against him incompetent and unlawful. Justice Oludotun Adebola, in his ruling on Thursday, voided and set aside the charges by the Federal Government against Kanu The court held that the failure of Nigeria to follow due process by way of Extradition was fatal to the charges against Kanu. Reacting to the court ruling, Malami had stated that the court only discharged Nnamdi Kanu and did not acquit him of the charges. The AGF stated that the Muhammadu Buhari-led administration would explore other options in the case against the IPOB leader. But in a statement sent to Naija News on Friday, Ejimakor described Malami’s position on the Court of Appeal judgment as flatly wrong and “perverse to boot.” He stated that if the federal government refuses or stalls on releasing Kanu solely because it desires to levy further or new charges, it will amount to a burgeoning holding charge impermissible in Nigeria’s jurisprudence. “Further, no new charges can stick against Kanu because, in the present circumstance, the extraordinary rendition is an abiding factor that has created a permanent barrier to his prosecution,” Ejimakor said. “Keep in mind that the extant trial of Kanu could never have proceeded had he not been illegally renditioned. So, it is not legally possible to lose jurisdiction in the extant charges and at once obtain jurisdiction in the next round of charges. “The judgment of the Court of Appeal has therefore grandfathered a continuing lack of prosecutorial jurisdiction that will, in the interim, be very hard to overcome. “Thus, before the levying of any new charges can have a toga of legality or chances of conferring prosecutorial jurisdiction, Kanu has to be released first. Anything to the contrary will be nugatory.”