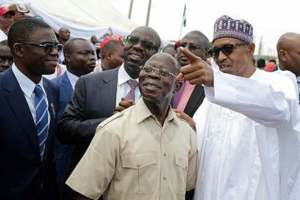 The question as to whether President Muhammadu Buhari and other members of his inner team were justified in humiliating Comrade Adams Oshiomhole out of the office of national chairman of the All Progressives Congress, APC is one that will endure for some time.

After lending himself to the ferocious campaign that returned Buhari to office, Oshiomhole was easily dispensed with, in a way that was not contemplated against any of his two predecessors.

Yes, Chief John Odigie-Oyegun was with Oshiomhole in tow, spitefully stopped from a second term, but he completed his first term.

Oshiomhole, however, suffered worse indignity in the sense that he was not even allowed to attain up to half of his four-year term.

Indeed, your correspondent has been appraised on how the last move against Oshiomhole was about the last of several attempts in the past.

At least three of those attempts in November 2019, March 2020, and the last successful attempt all had significant prodding from within the president’s inner circle.

After being given the mandate to initiate the moves to remove Oshiomhole, the operatives were embarrassed as the Villa repeatedly removed the carpet from under their feet.

The last move in March was particularly embarrassing. The adventurists had scented victory; the Court of Appeal had put Oshiomhole’s matter off indefinitely.

They were shocked to hear that same day that the court allegedly on the prompting of a very high official in the Villa reconvened to reinstate Oshiomhole.