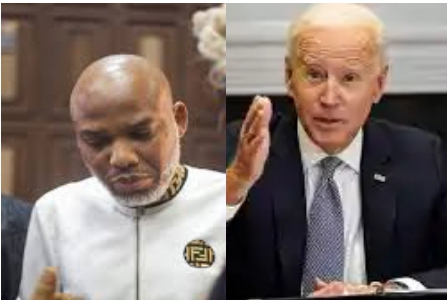 As the pressure on the Nigerian Government to heed the orders of courts to release the Leader of the Indigenous People Of Biafra IPOB, Mazi Nnamdi Kanu gathers momentum, TX State Representative Jarvis Johnson (Democratic -Houston) and the Biafran Advocacy Group (B.A.G), a human rights organization based in the U.S has urged the U.S government to join other governments and organizations to compel the Nigerian government to immediately release Kanu.

This was contained in a letter signed and directed to the U.S. President, Joe Biden, in the week by TX State Representative, Jarvis Johnson.

The report stated that Mazi Nnamdi Kanu’s only offense is his persistent request for the Nigerian Government with his assistance of the International Communities to conduct a referendum as a peaceful means of resolving the “national question” in Nigeria.

It further affirmed that Kanu’s request is consistent with International Law and Practice while citing different cases, including a referendum that led to the end of 30 years of war in Sudan, the U.K. discontinued membership in the European Union(Brexit), and the issue of Scotland.

Consequently, TX State Representative, Jarvis Johnson calls on the United States government and other agencies to facilitate, as ordered by the Nigerian Court of Appeals, and the UN Working Group Opinion, Number A/HRC/W GAD/2022/25 the immediate and unconditional release of Kanu from his unlawful detention in Nigeria.

The letter read in parts: “Mazi Nnamdi Kanu, a British Citizen was kidnapped in Kenya on June 19, 2021. After a week of torture in Kenya, Kanu was forcibly taken to Nigeria. Kanu was charged to Court by the Nigeria Government on alleged offenses committed in the United Kingdom. After a series of spurious amendments to its charging instruments, a series of continuous adjournments of Court dates, and a foiled plot to conduct a secret and quasi-military trial of Kanu by the Nigerian government. He has finally had his days in the Nigerian courts.

“The Abia State High Court judgment of January 19, 2022, exonerated Kanu from jumping bail and ordering the Nigerian government to apologize and pay him compensation for the military invasion of his ancestral home. On October 13, 2022, the Nigerian Court of Appeals in Abuja, Nigeria unanimously held Nigeria’s government detention of Kanu as illegal. The Court found Kanu was kidnapped from Kenya and unlawfully detained in Nigeria.

“The Federal High Court, Umuahia Judgement of October 26, 2022, ruled Kanu was extraordinarily renditioned and ordered compensation for him. Kanu was denied basic human rights and independent/Specialist medical care for an ongoing heart ailment.

“Rather than comply with these legal decisions and mandates, the Nigerian government has refused to release Kanu and has resorted to delaying tactics to alter the course of Justice.

“TX State Representative, Jarvis Johnson calls on the United States government and other agencies to facilitate, as ordered by the Nigerian Court of Appeals, and the UN Working Group Opinion, Number A/HRC/W GAD/2022/25 the immediate and unconditional release of Kanu from his unlawful detention in Nigeria.”