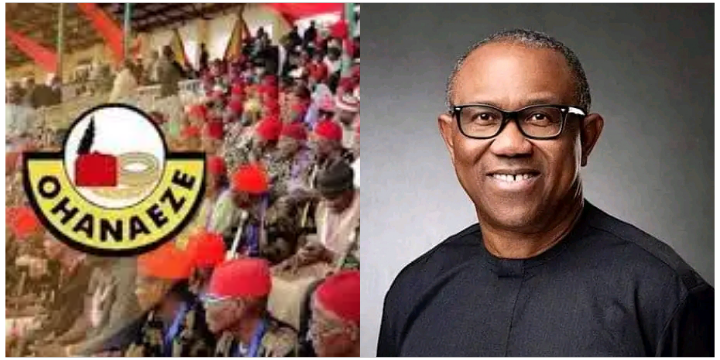 In a countdown to the 25th February 2023 Presidential election, the National Vice President of the apex Igbo Sociocultural Organization, Ohanaeze Ndigbo, Ichie (chief) Damian Okeke-Ogene has reaffirmed their stance on the earlier declaration of support for the Labour Party Presidential candidate, Mr. Peter Obi.

Responding to questions about the stance of the organization in the upcoming general elections, Ichie Damian Okeke-Ogene (Idilikidi Mbuze Nanka) disclosed that every Igbo man including the Presidential flag bearer of the Labour Party, Mr. Peter Obi is a member of Ohanaeze Ndigbo.

He stated that there are two major presidential candidates from the Igbo extraction, citing the flag bearer of the All Progressives Grand Alliance APGA, Justice Peter Umeadi, and Mr. Peter Obi of the Labour Party.

Ichie Okeke-Ogene, however, stressed that the resolve of the Ohanaeze Ndigbo Worldwide to endorse Mr. Peter Obi for President, under the platform of the Labour Party, is based on merit and prominence, while citing their resolution during the last ‘Ime Obi’ meeting of the organization, at Owerri, the Imo State capital.

In his words, “Our silence has been golden. We have been using the words; Nzogbu Nzogbu, Enyimba Enyi, Mana Onwebeghi Ihe Anyi Zogburu”.
“Ohanaeze is taking on merit by backing the most prominent/, Mr. Peter Obi.

“Ohanaeze has made it very clear during their IME OBI meeting in Owerri that they have no other candidate except Peter Obi. We also believe that Obi’s Candidature is not negotiable.

“During the time of Ekwueme, they were eleven, and Ohanaeze beckoned Igbo members of the People’s Democratic Party, PDP, to prone down the number. Today, we have two candidates. In our last meeting, it was obvious that before, we have been keeping silent and our silence is golden, it’s strategic because, we want to watch other Sociocultural Organizations whom we have supported their candidates; We have supported the Yoruba candidate, Niger Delta Candidate, Fulani Candidate, and Hausa Candidate. We now wait and see whether they will appreciate our support.
“Now, they are the people who are carrying out this campaign, so, there is no way we can lack behind, have to key into that.”

“Ohanaeze believes that Peter Obi is a Nigerian Candidate. Remember, Obi said that nobody should vote for him because he’s Igbo rather than on merit.” Ichie Okeke-Ogene said.

Recall that in a statement by the spokesman, of Ohanaeze Worldwide, Dr. Alex Ogbonnia, in Enugu, the organization said it stood on the position of the Southern and Middle Belt Leaders Forum (SMBLF) endorsing the Southeast to produce the next president.

The statement reads in part: “The resolve of Ohanaeze Ndigbo Worldwide for the 2023 general election is constant, consistent, and very clear, without any form of equivocation whatsoever.

“In the first place, going by the principles of zoning and rotation of power in Nigeria which has been in existence since 1999, it is the turn of the Southeast of Nigeria to produce the president in 2023.

“Ohanaeze Ndigbo has canvassed to various eminent persons in Nigeria, seeking their support for the presidency to the Southeast come 2023.

“We are delighted by the responses from various groups and highly placed patriotic Nigerians.