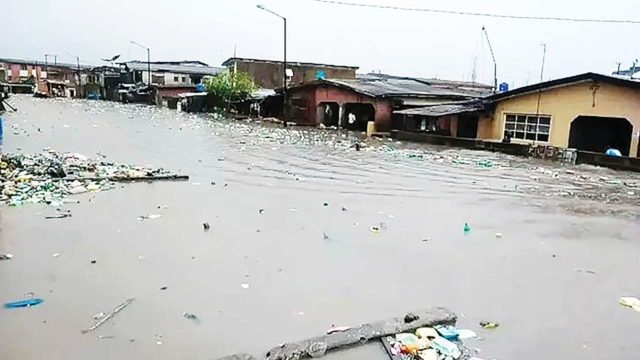 A submerged part of Agege yesterday

Lagos residents, yesterday, recorded another tragedy as a four-year-old girl was swept away, a building collapsed and residents battled heavy flood after a downpour that lasted for hours submerged many parts of the city.

As the downpour took intermittent breaks, it was traffic snarls on all major roads of the commercial mega city.

While the rain forced some residents to stay indoors, a few others suffered personal tragedies as the downpour and flooding led to destruction of properties, including a building collapse at Iyana Ipaja area of the state.

At Iyana Oworo, the submerged road caused vehicular traffic stretching all the way back to Alausa, covering over 10-kilometre distance.

On the Ikorodu Road, vehicles were stuck in a heavy gridlock with little or no movement for several hours.

The four-year-old girl was swept away by flood at Papa Ashafa area of Agege. The National Emergency Management Agency (NEMA) confirmed it was on the search of the child and advised residents of Aboru, Iyana-Ipaja, Command Ota in Ogun State through Agbara, on the route of the canal before it discharges into the sea, to look out for the body.

It was gathered that the girl, Azizat, lived with her parents at No. 38, Fashola Street, off Odebode Street, Papa Ashafa, Orile-Agege, but when their house was overtaken by flood and in an effort to relocate to higher ground with other residents, Azizat mistakenly missed her step into a drainage that was covered with flood and was swept away.

Also in the same area, a mother and her daughter were injured at No. 12, Hassan Adejobi Street, Papa Ashafa, Orile-Agege, as a result of flooding. The flood, which collapsed a fence on their building, was also responsible for dislodging occupants of a 10-room bungalow domiciled in the same compound.

A preliminary report at Orile-Agege had it that “upon arrival of the Lagos Emergency Management Agency (LASEMA) officials at the scene, a fence fell on a bungalow boy’s quarters with six rooms located in the same compound, while a 10-room bungalow was submerged at about 6:00a.m. Presently, about 20 families have been displaced by the flood.”

In another development, four buildings partially collapsed and two women were rescued, including a pregnant woman, who slumped but was revived immediately. The building collapsed at Ashade Quarters, behind Guinness, while the two women lived at No. 26, Railway Line.

A statement from the emergency agency said 18 households in a compound had been advised to evacuate No. 18, Railway Line, Ashade Quarter, Agege, for the safety of their lives as the downpour had weakened the building though the occupants of the building expressed readiness for evacuation.

T. he Lagos State Police Command spokesman, Bala Elkana, who confirmed the incident, said the police were working with emergency agencies in the search effort for the girl.

Yesterday’s downpour also left many commuters stranded on major highways on their way to their various offices and it left residents with sad stories of wreckage caused by the flood.

A storey building at No. 3, Sadiku Street, Alaggba, Iyana Ipaja, also collapsed suddenly during the downpour, leaving scores injured in the process. The incident came barely 24 hours after a similar incident occurred at Ogudu area of the state on Wednesday, in which two teenagers, a girl and a boy, lost their lives. The ill-fated storey building, which collapsed yesterday had eight rooms, 23 shops and one store .

Director-General of LASEMA, Dr Femi Oke-Osanyintolu, who confirmed the incident, said it occurred at about 11:00a.m. and no life was lost.

Meanwhile, Oke-Osanyintolu said the affected area was subsequently cordoned off while integrity testing was also carried.