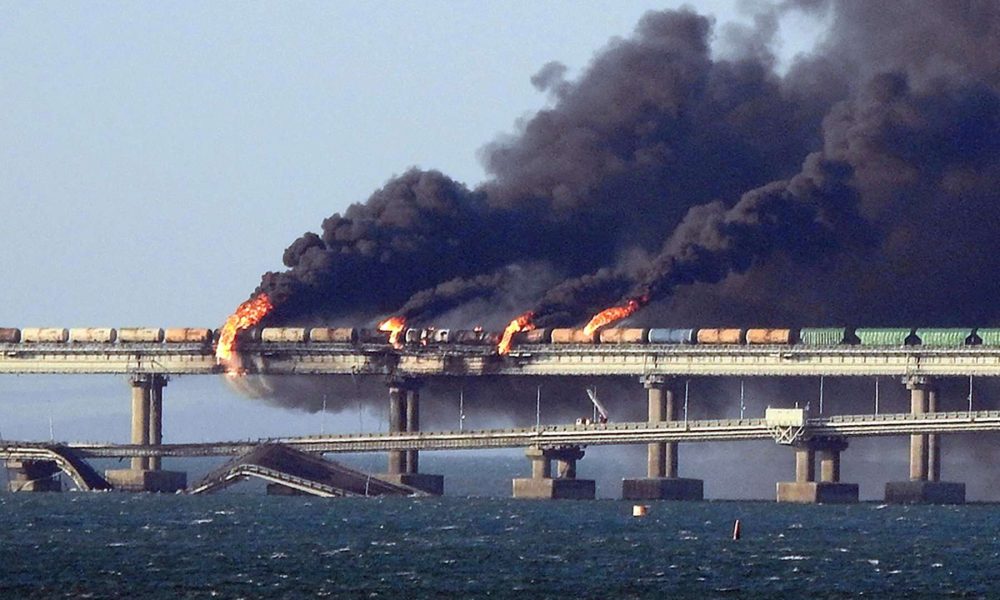 Russian President, Vladimir Putin has described the blast on the link bridge between annexed Crimea to Russia as a terrorist act by the Ukrainian government.

According to him, the blast, which was devised and carried out by the Ukraine special service, aimed at destroying Russia’s critical civilian importing infrastructure. Putin said this during his meeting with, the Head of the Investigative Committee, Alexander Basketin, who was presenting findings of an enquiry into Saturday blast. Recall that part of the Crimea bridge, which is the only bridge linking annexed Crimea with Russia had on Saturday exploded. The Russian state media RIA Novosti had on Wednesday reported that Russia’s Federal Security Service (FSB) has revealed that eight people have been arrested in relation to the Crimean bridge blast. According to the RIA Novosti, Russia’s FSB noted that five out of the eight people arrested were Russians, while the three others were citizens of Ukraine and Armenia. Naija News reports that the RIA Novosti said the report by FSB and the Russian Investigative Committee shows that the eight people took part in the preparation of the crime, and have therefore been detained as part of a criminal case. RIA Novosti also reported that the FSB report stated that “the explosive device was concealed in rolls with polyethene construction film on 22 pallets with a total weight of 22,770 kilograms.” The FSB was reported by the state media to have also claimed that the explosives left the Ukrainian port of Odesa in August and transited through Bulgaria, Georgia and Armenia before entering Russia. The Russian state media RIA Novosti said the FSB however maintained that “the main intelligence department of Ukraine’s Ministry of Defense, its head Kyrylo Budanov, and its employees and agents organised the “terrorist attack” on the Kerch Strait road-and-rail bridge.” According to a CNN report, “the bridge is strategically important because it links Russia’s Krasnodar region with the Crimean peninsula, which Russia annexed from Ukraine in 2014 in a move roundly criticized by the international community.” This is evidence that the bridge is key to supplying Crimea with both its daily needs and military supplies, as reports say that the Russian military has used it to carry vehicles, armour and fuel across to Crimea peninsula in the last few months. However, monitoring reports from Channels TV London, Naija News learnt that the special adviser to the Ukrainian President had gloated over the bridge blast but did not claim responsibility for the attack. Ukraine in the report is yet to publicly comment on the new claims by Russia’s FSB and Investigative Committee. The blast which officials said killed four people has left thousands of motorists stranded on the Crimea bridge as vehicles are queued waiting to cross the damaged bridge. Channels TV London said some motorists estimated the queue to be up to 15 kilometres long and would take at least 10 hours to cross. Meanwhile, Russia launched mass missile strikes against Ukrainian cities on Monday as a form of retaliation for blasting the Crimea bridge. The attacks have left no fewer than 19 dead across Ukraine in a day, with dozens wounded, as the Mayor of Kyiv warned residents to stay in their shelters, following a suspected attack on the capital. A video released by the state, showed that other Ukrainian cities affected were Curzon, Zaparisia and Nicopol. According to Al Jazeera, Putin at a televised meeting of Russia’s Security Council confirmed the attacks were in retaliation for the Crimea bridge blast, and that any further Ukrainian attacks would yield a “severe” response from Moscow, the Russian capital. The Commander-in-chief of the Ukrainian Armed Forces, General Valeriy Zaluzhnyi said 75 missiles were launched, 41 of which were neutralised by the air defence system. Ukrainian President Volodymyr Zelenskyy has on that note appealed to leaders of the Group of Seven (G7) countries for more air defence capabilities.