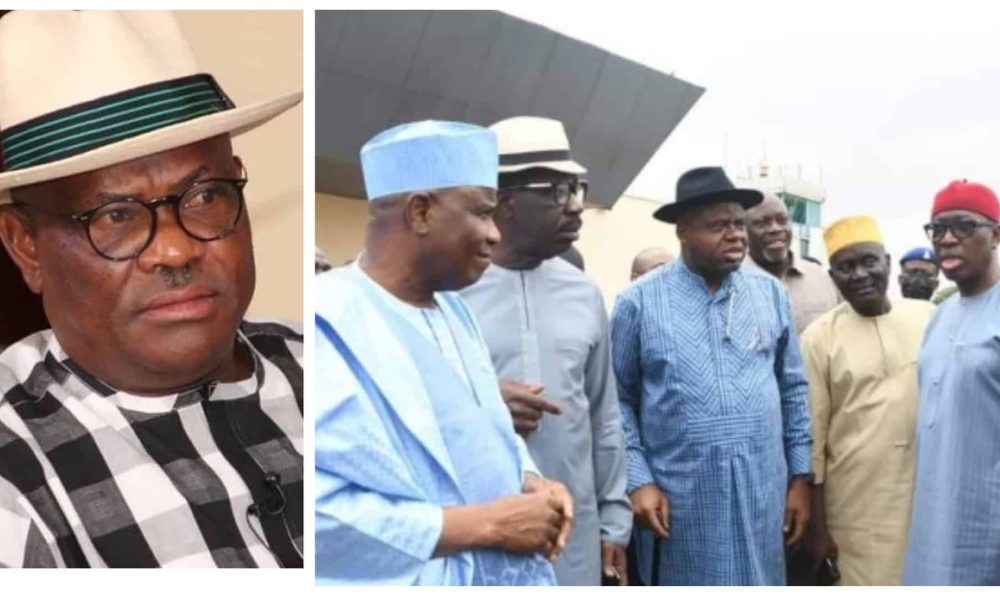 The main opposition party, the Peoples Democratic Party (PDP) may have plunged deeper into crisis as about four governors have teamed up to counter the aggrieved G-5 governors led by Governor Nyesom Wike of Rivers State.

Naija News reports that Wike and other governors had pulled out of the presidential campaign of Atiku Abubakar, insisting the National Chairman of the party, Iyorchia Ayu, must resign or be removed. Recall that Wike and three of his governor allies, Seyi Makinde (Oyo), Samuel Ortom (Benue), and Okezie Ikpeazu (Abia), had on Friday night departed for Spain for their next round of strategy on the crisis in the PDP, with Enugu State Governor Ifeanyi Ugwuanyi expected to join them later. However, some governors feel if the demands of the Wike camp are met, it will only set the opposition party for more demands and blackmail by the aggrieved governors. These governors loyal to Atiku and Ayu have now teamed up as a counter force to check what they perceive as the excesses of Rivers State Governor.

According to The Nation, those leading the anti-Wike forces include governors Godwin Obaseki (Edo), Ahmadu Fintiri (Adamawa), Duoye Diri (Bayelsa), and Darius Ishaku (Taraba), and several notable members of the party. According to sources, these governors have threatened to dump Atiku should Wike and his group be allowed to have their way on Ayu’s exit. Atiku Abubakar who was at some point considering asking Ayu to step down for peace to reign had to make a u-turn due to pressure from his allies. A source said: “The situation within the party as regards the fate of our National Chairman has become more complicated. While it is true that our presidential candidate is now less opposed to Wike’s demand for Ayu to resign, following the outcome of the meeting between the Board of Trustees (BoT) leadership of the party with Wike in Port Harcourt last week, Atiku had indicated readiness to agree with Wike and sacrifice Ayu. “But there is a twist to the whole issue as some of our governors, peeved by Wike’s overbearing attitude, have warned the party not to toy with the idea of giving in to Wike and his supporters. “I can tell you that Governor Godwin Obaseki, Ahmadu Fintiri, Duoye Diri, and Darius Ishaku, among others, are now strongly opposed to Wike’s demand for Ayu to resign and have vowed not to allow such to happen under any arrangement. “The governors are not alone in this stance. Many prominent members of the BoT and the NWC are also opposed to the thought of allowing Wike to have his way regarding Ayu. “To them, the Rivers State governor has done his worst and should not be allowed to force Atiku and the PDP to their knees.”

Wike, Makinde, Ortom, and Others May Demand More

A member of the National Executive Committee (NEC) of the PDP stated that Obaseki, Fintiri, Diri, and Ishaku believe that Wike and his allies would make more demands should Ayu be removed based on their request. The source said: “Beyond the issue of ego and bad timing, there are worries that Wike and his supporters may remain implacable even after succeeding with the sack of Ayu as national chairman. With the way they’ve carried on so far, some leaders of the party are insisting that it will be wrong to allow one man to hold the entire party to ransom in this manner. “We are telling Nigerians that we are coming to correct the lopsidedness in government. We are saying we want to offer a decisive government to Nigeria. How do we explain that we cannot manage our own affairs without being forced to accept queer conditions? How do we explain that we can be forced to abandon our own rules and constitution just because someone wants to play God? “These are the questions some of us are asking, and as such, I am not surprised to hear that some of our leaders are already opposing the egoistic demands of a minority who are unwilling to put the general interest of the PDP over and above their personal desires and ego.”