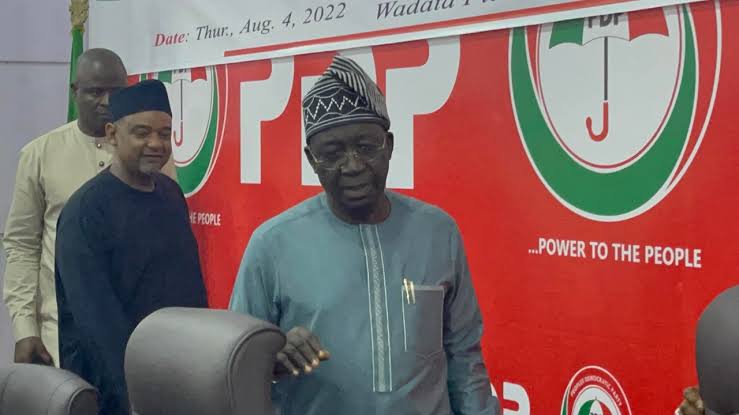 A chieftain of the Peoples Democratic Party (PDP), Okwesilieze Nwodo, has rejected the call for the resignation of the party’s National Chairman, Iyorchia Ayu.

Naija News reports that Governor Nyesom Wike and his allies have continued to demand the immediate resignation of the Benue-born politician. Wike and allies asserted that the party’s Presidential candidate and the National Chairman cannot come from the same region in the interest of fairness, equity and justice. However, the reconciliation committee of the PDP Board of Trustees (BoT), in its report to the party leadership on Friday, recommended that Ayu should resign after the presidential election in February if the party wins. Speaking during an appearance on Channels Television on Friday, Nwodo stated that the call for Ayu’s resignation is unfortunate and is coming at the wrong time. The former PDP national chairman and a member of the BoT pointed out that it will be a big mistake to ask Ayu to step down months before the 2023 general elections. Nwodo also said Ayu should be allowed to lead the party’s campaigns since he understands the party and has started working towards the party’s victory in 2023. He said: “Calling for justice, fairness, and equity at any time is right. The situation in our party right now is a call for the resignation of the party chairman as a means of balancing North and South power in our party. “At the meeting of the Board of Trustees today, a committee on reconciliation which I’m a member submitted our report to the NWC. “The Board, in its wisdom, felt that to ask the chairman to resign at this time is like shooting your general at the point of going to war. “The chairman of the party is the person who leads the party to the campaign for the election. “Therefore, it is inauspicious to ask him to step down at this time and the person who will come will take time to understand the build-up we had in the past five months. “It is difficult for us to change an executive we just elected in the middle of the campaign. Let us wait and win the presidency and Ayu will go.” Nwodo stated that Ayu will not remain in office if the presidential candidate of the party, Atiku Abubakar, emerges as the next president. The former PDP national chairman added that timing is a crucial factor in politics. He added: “Of course, in politics, that is a great big mistake. Political expediency is tied up with the timing. You have to time whatever you want to do in politics to resonate with the result you want. “We believe that once we have a President in place, there is no way the chairman can remain in that zone.”