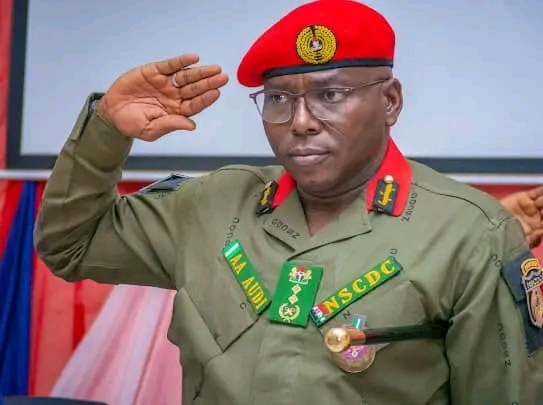 Dr Ahmed Audi, Commandant General (CG) of the Nigeria Security and Civil Defence Corps (NSCDC) has charged officers and men of the Corps to join in the fight against corruption ahead of 2023 general elections.

Audi said this during the induction ceremony of new Heads of NSCDC Anti-Corruption and Transparency Unit (ACTU) by the Independent Corrupt Practices and Other Related offences Commission (ICPC) at the Corps National Headquarters in Abuja.

He said that the induction of more personnel into ACTU across the Corps formations nationwide will foster integrity in the conduct of personnel in the forthcoming elections.

“They would enlighten both NSCDC personnel and civilians about the need for integrity, as well as anti-corruption stance of the Corps for the elections.

“No meaningful reform for growth and sustainability is possible where corruption reigns.

“For this reason, we have worked hard to maintain the culture of probity, accountability and transparency in the Corps,” Audi said.

According to the CG, from 2018 till date, ACTU had recovered over N120 million Naira from various corruption related cases.

He charged the newly inducted ACTU heads to be Anti-corruption Ambassadors and urged them to put in new vigor of commitment.

“You are now wearing a new regalia, so, if before, you didn’t have a direction, now that you have affirmed and been inducted, it means you know we are serious.

“You must not leave any stone unturned in ensuring that NSCDC at your various Commands is 100 per cent ethics and transparency compliant.

“Henceforth, you will be monitored not only by the Corps but also by ICPC,” Audi said.

ICPC Chairman, Prof. Bolaji Owasanoye, admitted that the induction of NSCDC personnel displayed the management’s effort to extend transparency to all appendages of the Corps.

Prof. Owasanoye, represented by Mr Olayinka Aiyegbayo advised the new inductees to key into the anti-corruption strategies of the Corps.

Mr Aiyegbayo urged the new heads to support and complement the efforts of ACTU in accordance with the mandate of the Unit.

“We reaffirm our conviction that the relationship between both organisations will continue to wax stronger for the service of our nation.” he assured

He congratulated the NSCDC for being ranked second amongst the agencies of the Ministry of Interior in the recently conducted 2021 Ethics and Integrity Score Card Assessment of M.D.As by the ICPC.

No fewer than 50 personnel were inducted after which a Suggestion box was unveiled by the CG.

Award Plaques was also presented to officers and men who had shown exemplary delivery in the discharge of their duties.

The event witnessed the presence of representatives of heads of sister agencies who delivered goodwill messages on behalf of their organisations.