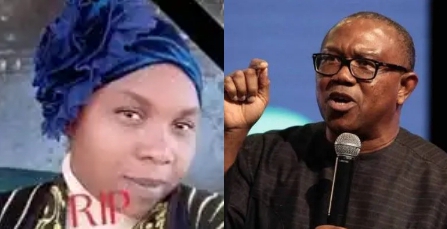 The late Mrs. Chintex was reportedly murdered by gunmen on Monday in her residence in Kaura.

Mr. Obi who regretted the untimely demise of the LP’s woman party leader vowed to prioritize security if elected to office.

“I am shocked by the mindless killing of Mrs. Victoria Chintex, the Labour Party’s women leader in Kaura, Kaduna State, by yet-to-be-identified gunmen. Her death is a huge loss to her immediate and extended family and our Labour Party. She lives on in our hearts.

“Her killing, and the loss of many innocent lives across the nation to gunmen and terrorists, are the reason why I must prioritize the war against insecurity as my first task in the office. We must not allow the waste of human lives in Nigeria under any guise.

“May the soul of Late Mrs. Victoria Chintex rest in perfect peace? My sincere condolence to her family.

Recall that the husband of the late Mrs. Chintex was also said to have sustained gunshot injuries and currently receiving treatment at a medical facility.