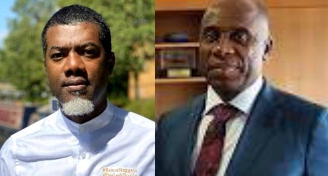 Former Presidential aide and chieftain of the Peoples Democratic Party (PDP), Reno Omokri has advised the party’s leaders to win back former Minister of Transportation, Rotimi Amachi back to their fold.

Omokri made this statement on Wednesday on Twitter following the news of the party’s five aggrieved governors popularly known as G5 traveling to London.

Sources said the G5 landed in London on Tuesday to have a crucial meeting where they would either endorse Bola Tinubu or Peter Obi, the presidential candidates of the All Progressives Congress (APC) and the Labour Party respectively.

The five governors are Nyesom Wike of Rivers, Seyi Makinde of Oyo, Samuel Ortom of Benue, Okezie Ikpeazu of Abia, and Ifeanyi Ugwuanyi of Enugu who have been at loggerheads with the leadership of the PDP and calling for the resignation of their National Chairman, Senator Iyorchia Ayu.

Reacting to the G5 trip to London, Omokri issued advice to PDP leaders, including the presidential flagbearer Atiku Abubakar, his running mate, Governor Ifeanyi Okowa, and the party’s helmsman, Ayu, and others to do all they could to hold on to Wike, who has been the frontrunner of the disgruntled governors.

He, then, added they should bring back Amaechi, if Wike eventually aligned with any of the opposition parties, stressing that the former minister started his political career with PDP.

Omokri stressed that Amaechi and Wike cannot be on the same political ship, hence, an advantage for them to lure the former back to his old party.

“My dear Peoples Democratic Party. Let us do all we can to keep Wike in the PDP. But if, despite our best efforts, he endorses outside the party, let us extend a right hand of fellowship to Rotimi Amaechi. PDP created Amaechi. And we know he can’t coexist with Wike,” Omokri tweeted.