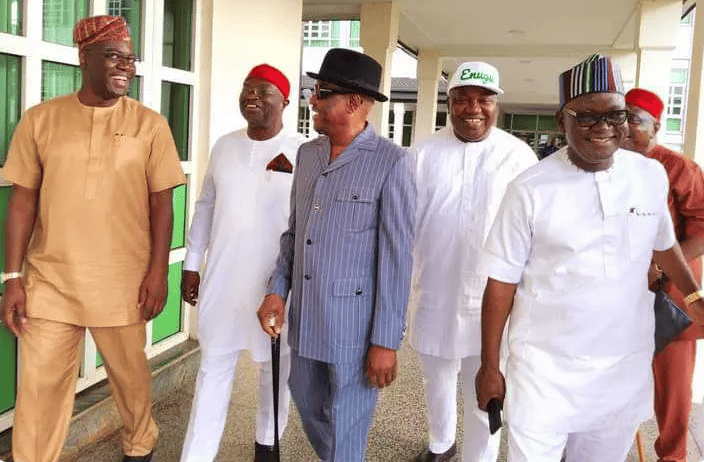 The political ambition and party membership of the Governor of Rivers State, Nyesom Wike and other governors have been threatened by Peoples Democratic Party (PDP) stakeholders from different states ahead of the 2023 general elections.

Naija News reports that Wike and four other Governors including, Samuel Ortom, Seyi Makinde, Okezie Ikpeazu, and Ifeanyi Ugwuanyi of Benue, Oyo, Abia, and Enugu State respectively, have ditched strategic gatherings aimed at ensuring PDP presidential candidate, Atiku Abubakar’s victory in the coming elections. The party’s aggrieved governors have maintained their stand that PDP National Chairman, Iyorchia Ayu must resign his position before they can fully back Atiku’s presidency. Their requests, among other issues, have caused cracks in the party and are holding back the progress of the nation’s main opposition party which seek to unseat the incumbent leadership of the All Progressives Congress (APC). However, in contrast to the decision of pro-Wike governors, many PDP stalwarts in their respective states are mobilizing for Atiku and have individually threatened the said aggrieved governors who have remained adamant in their participation ahead of the 2023 polls. Findings by Vanguard revealed that the party faithful, whose positions are not going down well with their governors, have started setting up pro-Atiku structures to counter the state leaders and support the candidacy of Atiku from state to local levels. The structures, according to the party stalwarts, would be used in campaigning for the former Vice President and his running mate, Governor Ifeanyi Okowa. Some of the party chieftains who expressed their stands with Atiku berated the state governors for choosing to sabotage political processes in the PDP aimed at returning the party to power come 2023. They told the news platform that they are already putting together Presidential Election Campaign Councils in their respective states regardless of the position of their governors who have vowed not to campaign for Atiku.

An interaction between journalists and PDP stakeholders in Benue State shows that, unlike Governor Ortom, most party members are not opposed to Atiku/Okowa’s ticket. It was observed that party stalwarts at all levels have been going about galvanizing support for candidates ahead of the 2023 general elections. It was though observed that nothing seems to be happening on the side of the government to suggest that it is backing the candidature of Atiku. The PDP government and the party secretariat are said to be silent on any form of campaign for Atiku. The development clearly indicates that though Benue PDP is going about its activities to seek the mandate of the people for all other elective positions, that of the President is left unattended until the leader of the party, Ortom, gives the go-ahead. Regardless of that, some PDP support groups are mobilizing for Atiku in the state. Atiku Grassroots Movement, AGM, is one of them. During an interactive session with Vanguard Sunday, the AGM, convened by a former Chairman of Benue Internal Revenue Service, BIRS, Terzungwe Atser, revealed it has set up the state office where their activities are being coordinated. The Convener of the movement has been able to gather some other important personalities including former Local Government Council chairmen and former political appointees as well as several others to drum up support for the candidature of Atiku. The group assured that it is making efforts to have its presence felt in all parts of the state with the recent inauguration of local government wings. It urged its members to swiftly move into the hinterland and canvass support for the Atiku presidency. Speaking to journalists on efforts to galvanize support for the PDP presidential candidate, Atser said:” So far, we are in the process of setting up the structures statewide. “We have put up the structures at the state levels, local government levels and zonal levels. “Last Monday, we held a meeting and charged the local government officials to set up structures at the sub-ward levels. “We plan that in a week we will be going around to inaugurate the structures at the local government and ward levels. “We have no hitches whatsoever. We have set up an office in Makurdi already. Individually some people are setting up offices in their local government areas. We are sponsoring our activities. “But just like any other support group, we are expecting assistance and support from the national secretariat. “I am a card-carrying member of the PDP, so I have to support my party. I am convinced that among the candidates vying for the position of president of this country, Alhaji Atiku Abubakar is the best candidate and has a better idea of repositioning Nigeria.’’ On their part, Ayu’s kinsmen under the aegis of Jemgbagh Development Association, have threatened political consequences against Governor Ortom should he continue aligning with those seeking to force him to resign. The threat was contained in the text of a press conference read by the President of the association, Terver Felix Abor. Abor accused the governor of pursuing a deliberate attempt to undermine the people of Jemgbagh namely: “The honourable Minister (of Special Duties), Dr. George Akume, the former Senate President, Dr. Iyorchia Ayu, and Senator Orker Jev.” ”We are disheartened that the governor who wants to be a senator for Zone B of Benue State comprising Jemgbagh and MINDA will involve himself among those destroying a Jamgbagh son, Ayu,” he added.

In the South-West, PDP stakeholders from Oyo, Ondo, Osun, Ogun and Ekiti State reportedly pledged to collectively support and work towards the victory of Atiku and Okowa in the 2023 presidential poll. The assurance, Naija News understands was given by the Publicity Secretaries of the opposition party in the various states. However, some party members, who pleaded anonymity, said they might be forced to vote for any presidential candidate outside their choice. “Oyo is a peculiar state and we have to be careful not to lose to the All Progressives Congress, APC, in this state”, a chieftain from Oyo who spoke anonymously to Sunday Vanguard, said. He added: “We can’t lose this state because of Governor Wike. As much as we love our governor, we can’t abandon our presidential candidate. It might affect the party’s chances in other elective positions”.

In Enugu State, it was observed that party stakeholders in the state are supportive of their presidential candidate, in contrast with their governor’s stand. Some who spoke anonymously told journalists that Governor Ugwuanyi’s alignment with Wike is personal and not the position of the entire PDP members in the state. According to them, it is very unlikely that they would abandon the PDP presidential campaign because of Wike, who they said is fighting for himself and not the South. It could be recalled that the PDP Governorship candidate in the state, Peter Mbah, had told newsmen earlier that he had no reason not to support PDP in all elections. Also, people like former Minister of Foreign Affairs, Dubem Onyia, are known core supporters of Atiku. “Our governor knows why he is aligning with Wike. The Rivers governor is not fighting for the South. He is fighting for his interest. Why should we align with such a person simply because he lost the party ticket? Enugu PDP members are for Atiku. “Wike, after driving Peter Obi out of the party, wants to destroy the PDP. When the campaigns begin, we would see if Wike owns Enugu PDP or the people,” one of the party members in the state told the news platform.

As gathered by Vanguard, the state party leaders have not relented in their support for Atiku. Despite continuous attacks on their interests by Wike, many party stakeholders in the state are reportedly not in disagreement with the PDP presidential candidate. It was observed that many of the leaders had earlier defied Wike’s order and attended the inauguration of the PDP Presidential Campaign Council in Uyo. Those who attended the Uyo event include Senator George Sekibo, former Rivers East Senator Lee Maeba, Mr. Abiye Sekibo, Prince Uche Secondus and Celestine Omehia.

Support For Atiku In Abia State

Atiku’s presidential ambition is not opposed in Abia State despite the state governor’s alliance with his Rivers State counterpart. PDP supporters in the state are observed to be going ahead with their political movement in solidarity with the Wazirin Adamawa, Naija News understands. Also, the news platform noted in its report that despite his alliance with Wike’s camp, Governor Ikpeazu is fully supporting Atiku in the state. On his part, the state Coordinator of the Atiku Presidential Campaign Council, Chief Charles Ogbonnaya, told journalists that there is nothing to suggest that Ikpeazu is against Atiku. He said Atiku’s supporters in Abia still enjoy the full backing of the governor. This, however, may be strange to some political watchers who have been following developments in the party between both camps. His words: ”As far as I know, the governor has not in any way shown me a sign of not supporting Atiku.” Ogbonnaya told newsmen that so far, Ikpeazu has shown Atiku’s supporters care and encouragement. He said: ”As far as I’m concerned, he is doing well. The other day when we went to Uyo to flag off Atiku’s presidential campaign, we had the full support of the governor although he was not present. “The governorship candidate of our party, Prof. Uche Ikonne, was there. That the governor did not come is not a big deal. Ikpeazu is fully supporting Atiku’s presidential campaign.’’ The former Commissioner who spoke in Abia, further explained that despite being in Wike’s camp, Ikpeazu has not in any way antagonised or sabotaged Atiku’s supporters in Abia. “The slogan of our governor is five over five. You know me very well that I will always tell the truth. I confronted the governor and the responses he gave me were favourable. So, I have not seen cause to doubt him. As a party, the PDP family in Abia is one and united,” he added.