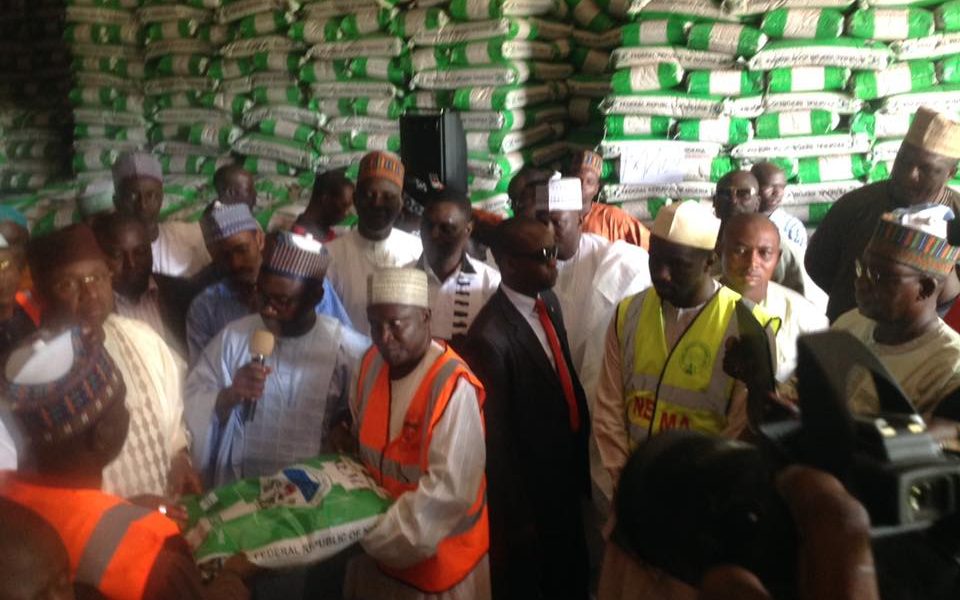 Bags of grains including maize, sorghum, and millet were over the weekend distributed to various persons affected by the home-wrecking floods in Sokoto State, Naija News understands.

The items were given by the federal government to alleviate the sufferings of the citizens following the destruction of their homes, and sources of livelihood by the flood disaster. Speaking during the handover of the items to the state government, the Director General of, the National Emergency Management Agency, Mustapha Habib Ahmed, said the development was in line with the assessment conducted and reports to the Ministry of Humanitarian Affairs, Disaster Management and Social Development. Ahmed expressed sympathy with the citizens, noting that the recent flood incidents in several states including Sokoto have resulted in the loss of lives, human displacement, loss of means of livelihood and socio-economic dislocation. According to him, President Muhammadu Buhari had approved the release of 12,000 metric tonnes of assorted grains from the National Strategic Reserve Stock for onward distribution to all states of the federation and the Federal Capital Territory, Abuja. He listed items distributed to include maize worth 3,320 bags of 50kg, Sorghum worth 2,840 bags of 50kg and Millet worth 1,250 bags of 50kg. Ahmed noted that the grains will be distributed directly to the deserving persons in collaboration with Distinguished Senators from the state, Honourable Minister representing Sokoto State, officials of the Nigerian Red Cross in the state, Religious and Community leaders, officials of the Sokoto SEMA and the NEMA Operations office. The Director-General admitted that the Federal Government through NEMA cannot compensate persons impacted by disasters. He said: “We cannot compensate people for the traumatic experiences that they have suffered in times of disasters. “Yet, we have to help people to get back on their feet and restart normal life with this type of relief intervention.” In his remark earlier, the Head of Operations, NEMA Zonal Office, Aliyu Shehu Kafin Dangi, said the agency has continuously worked with the Sokoto State Emergency Management Agency, in conducting damages and loss assessment in guide relief intervention to persons in need of support. Governor Aminu Waziri Tambuwal who was represented by the Secretary to the State Government, Mainasara Ahmed, promised to judiciously channel the relief materials to the most needed beneficiaries across the state.