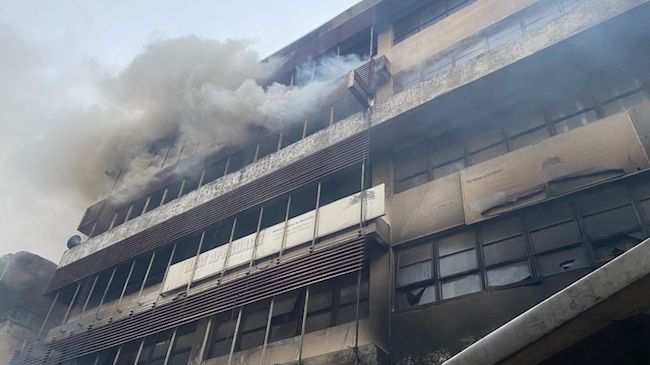 Another fire incident has gutted a building at the popular Balogun Market in the Lagos Island area of Lagos State.

The fire started in one of the popular market buildings on Thursday.

Although the cause of the inferno which could not be ascertained at the time of filing the report started spreading to other apartments.

Operatives of the Lagos State Emergency Agency, Lagos State Fire and Rescue Services said they have responded to a distress call concerning the fire incident.

In a statement made available and signed by the Permanent Secretary of the agency, Dr. Olufemi Damilola Oke-Osanyintolu, titled, ‘Situation report on the fire outbreak at Broad Street, Lagos Island’, he said, “The agency responded to distress calls concerning the fire incident involving some shops on the ground floor of a three-story building.

“The cause of the fire cannot be ascertained as no casualty was involved,” he added.

Meanwhile, the agency’s response team alongside two Lagos State fire service trucks, two LRU fire trucks, and police are present at the incident working together to subdue the inferno.
Source reported that this fire incident is happening three months after a fire broke out at the same Balogun market with several goods worth millions lost.