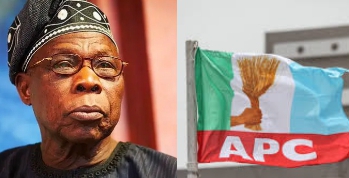 AHEAD of the February 25th Presidential polls, the ruling All Progressives Congress, APC, has told former President Olusegun Obasanjo to shun acts and statements capable of heating the polity.

The Publicity Secretary of the APC in Lagos State, Seye Oladejo, made the remarks at a forum at LTV ground, Ikeja, organized by the APC-Presudebrial Campaign Council, PCC, Lagos Media, and Publicity Committee, led by former Lagos State Commissioner fur Information and Strategy, Kehinde Bamigbetan.

Oladejo urged Obasanjo to concentrate on enjoying his retirement like other former heads of state and presidents of Nigeria, rather than heating the polity in the form of endorsement.

APC maintained that there is no political relevance in the recent comment by Obasanjo in endorsing a Presidential candidate ahead of the February 25 presidential poll.

Reacting to those demanding the medical records of the APC candidate, Bola Tinubu, Oladejo said, “it is not enough to present Tinubu’s health record in public as none of the presidential candidates in the race had been campaigning all over the country like him.

Oladejo, however, expressed optimism that Tinubu will win the Presidential election and the Lagos State Governorship poll for the re-election of the incumbent, Bababjide Sanwo-Olu, based on performance and scorecards in the past.

He also expressed gratitude to all the groups created by the APC PCC Lagos and volunteers that have rendered selfless service in showcasing the achievements of Tinubu as Governor of Lagos State as well as reaching out to the grassroots.