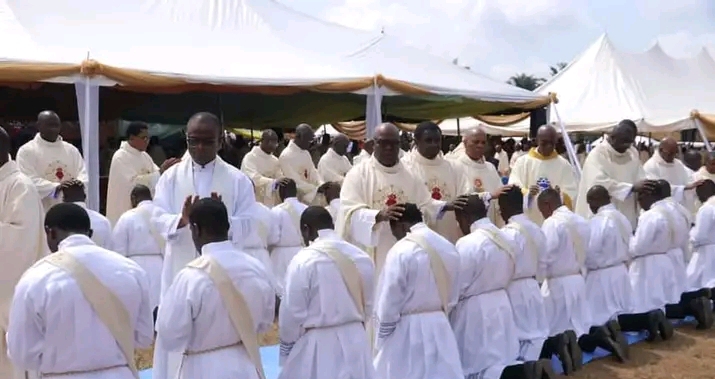 The Catholic Bishop of Enugu Diocese, Most Rev. CVC Onaga, has banned his Priests from organizing crusades, with emphasis on the Pentecostal kind of services.

He thus banned them from conducting crusades in their parishes.

Bishop Onaga announced the ban in his homily at the ordination of 26 priests and the celebration of the 50th anniversary of the Sacred Heart Seminary, Nsude (Junior Seminary) in Enugu Diocese, Nigeria.

He charged the priests to organize retreats for the parishioners and pay greater attention to prayers and not hold crusades.

Onaga who was celebrating his 55th alma mater warned priests against forming prayer groups, but to take their members to approved prayer places like Ugwu Dì Nso, a monastery, and others.

“Do not adopt the Pentecostal approach of service, and be careful in forming prayer groups,’’ he charged.

He admonished the newly-ordained priests to seek spiritual holiness and avoid being dragged into secular affairs.

Earlier, the rector of the seminary, Rev. Fr. Stanislaus Onodugo said the seminary was the brain-child of Bishop of Enugu, His Lordship Godfrey Okoye of blessed memory, in 1972.

He stated that since 1972, priests and lay persons that went through the seminary had graduated into reputable personalities.

“Today, the seminary can boast of at least one bishop who was among the second set to study in this seminary, and that is Bishop Onaga.

“We are also celebrating the grand finale of our golden jubilee which started on June, 27.

“Today, our dear bishop raised 26 deacons to the Order of Priesthood and we are happy that such an event is happening in our time,’’ Onodugo said.

The News Agency of Nigeria (NAN) reports that Bishop Onaga was among the second set of students to be admitted into the seminary in 1973.
Catholic Intercessory News Bulletins, Catholic Archdiocese of Benin City Nigeria.