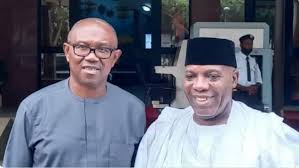 A chieftain of the Labour Party, LP, and Founder of One Love Foundation, OLF, Chief Patrick Eholor, Monday, declared that a court judgment convicting the Director General, DG, of the Presidential Campaign Council, PCC, of the party would not affect the campaign in any way.

Eholor who spoke with Vanguard said, Okupe is just one individual in the party’s campaign train, and without him, the party will forge ahead with the full backing of well-meaning Nigerians.

He said: “I am not sure it is going to affect the campaign of the Labour Party. Doyin Okupe is just one of the individuals in this campaign train.

“Why will people not learn to allow those without baggage take the front seat in Nigeria, if he knew this was hanging over his neck, why didn’t he operate behind and let someone else lead the campaign?

“Many Nigerians are aware that this case has been going on before the Obidient movement.”

However, he (Eholor) urged Okupe to resign his position as Director General of the Presidential Campaign Council of the party.

“I am sure with his position he may resign honorably and let other people take charge as the DG of the Campaign team, we have very good men and women highly respectable who can fit into that shoe ‘if’ need be. We are not there yet.

“Let me remind you of a retired General who was allegedly accused of being part of the presidential campaign team.

“He was accused of being one of the masterminders who came to Lekki’s protest for one of the #ENDSARS.

“We all protested that it was against the will of the Obedient People, he admitted that he was obeying the last command of the military.

He also accused the judiciary of delaying cases that were supposed to be concluded without delay including Okupe’s.

“The court judgment could have come sooner than this, you know the judicial system in Nigeria always delay and deny people’s justice. If the judiciary was up and doing this case would have been resolved before now.

“I wouldn’t blame the judiciary, this has been their usual way of practice because of some of the inefficiency when it comes to trials and litigations of this country.

“Nigeria’s judiciary system did not believe that justice delay is justice denied. This is a good example that we should all ponder.

“Moving forward the Judiciary should try and be trying cases with a 12-month calendar not more than one year”, he stated.

Meanwhile, he expressed the belief that the court judgment was not deliberately given to truncate the Labour Party’s momentum and goodwill it currently enjoys from its supporters.

“In conclusion, I believe this is not a deliberate attack from the judiciary to truncate the campaigns and also slow down the people’s goodwill.

“I think it is a thing that we must all learn from that if we have any litigation or court issues that we should try and not get involved in any sensitive position be it political or private sector or as an official because that might dent the reputation of that organization.

“I also want to think that Doyin Okupe did not do this deliberately, he might have been sure that he’d be acquainted from all charges, unfortunately, the judge saw it differently. I hope and pray that the court of appeal favours him.