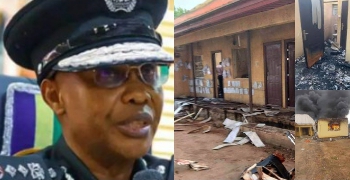 The Inspector General of Police (IGP), Usman Baba Alkali has attributed the attacks on INEC facilities to some politicians and secessionist groups in the South East and South West of Nigeria.

IGP spoke at the commencement of an investigative hearing of the House Ad-hoc Committee of the House of Representatives probing the attacks on offices and the facilities of INEC on Friday in Abuja.

Represented by the DIG in charge the of Department of Operations, Dandaura Mustapha, the IGP said, “The Nigeria police being the lead agency in internal security and elections generally are always at the receiving end. Whatever happens — the police must protect here and there.

“When INEC finally lifted on campaigns — the campaigns commenced and what we realized initially was inter and intra-party dispute. We realized that members of political parties were destroying billboards, posters, destruction of campaign offices in sopartsart of the state we quickly alerted the commissioner of police in charge of the commands and gave them em clear directive that it is the right of every political party to go to all the nooks and crannies he society and campaign.

“It is a constitutional right so on no account does a state governor or any state actor have the right to prevent political parties from moving about to do their campaigns. We now come to the immediate attack on INEC facilities. recently, the ones that took place in Osun and Ogun, then last week in Ebonyi, Imo, and Enugu.

“What we discovered is that — we all know in this country, it is a well-known fact that in the south-east geo-political zone we have issues of secessionists — the IPOB and ESN. These groups are bent on stopping elections from taking place.

“They have been doing it, especially now that the embargo on campaign save has been lifted. The election is approaching very fast and they are putting much pressure to see that this eelectionsdo does not hold in the southeast geo-political zone.

“In southwestern, we equally have the pro-Yoruba secessionists that are equally bent on succeeding and not allowing the ng election to take place in their areas, hence the attack on INEC in Osun and Ogun of recent. Those are there too sponsored by politicians and other stakeholders.

“There is also an issue of failed and desperate politicians who are bent on stopping INEC from conducting this election. The failed politicians are those who could not come back through any political parties, and as far as they are concerned, let everything spoil, let everything scatter. They are using that opportunity so sponsor illiterate followers of the party and hoodlums to make sure that this generally does not hold and should not be successful.

“On the part of the desperate politicians, they feel that since they cannot stop from taking all these measures (to stop election reffing) let them sponsor hoodlums to make sure that this election should not be a successful exercise.

“All these issues, we have gotten them and we have sat with the state commissioner of police and the action taken by the IGP. On the 17th of November, the IGP held a meeting with political party leaders, and INEC representatives were there. We discussed in length that all political parties are free to go about their campaigns in all the states and they should talk and work on their followers to desist from this hooliganism.

“The IGP equally held a meeting with all the operational officers of the other agencies, the military, civil defense offidefensend paramilitary agencies.

“We held a meeting on Tuesday the 1st of this month whereby all the operational officers of all the security agencies discussed measures to be taken to safeguard the facilities of INEC.

“The police are handicapped as most of the people arrested are connected to high places. Police are under-staffeunderstaffed up to four hundred thousand. We lack manpower. We need additional funding for recruitment. We lose personnel every day and every day to replace”, he said.