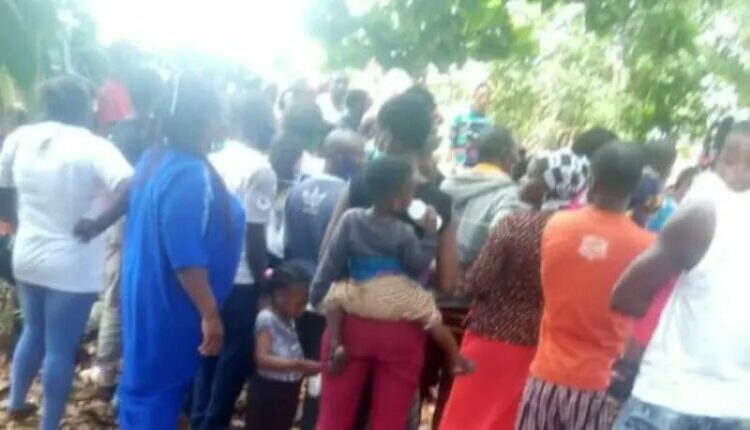 Unidentified persons have hacked a 15-year-old teenager, Jerome Emeka Akwuene to death in his room in the Ago Palace Way area of Lagos State.

The victim, an SS2 student was found in his room, tied to his bed with a cut on his neck in his room at 54, Niyi Onilari Street, Grand Mate Bus Stop, Ago Palace Way. Chubuike, an apprentice in the victim’s father’s shop told Vanguard that he came back from their shop at about 5:30pm on Monday, and met their door open. He said: “While at the shop yesterday, at 2 p.m., I was no longer comfortable. I wanted to leave but it was not yet my closing time. “So I waited. When it was 3pm, my anxiety to go home became high. I wanted to call Emeka on the phone but I had no recharge card. “Immediately it was 4:30pm, I started packing goods inside the shop which was unusual for me. I do move goods inside the shop between 5:00 pm-5:30 pm. “I became so worried that I took Keke NAPEP. I trek on a normal day. “On getting to the house, I discovered the washing machine was on, and water was flowing without hearing the sound of Emeka in the house. “I came outside to ask neighbours if they saw Emeka leaving for his mother’s shop and they said no. “I went back inside and on opening Emeka’s door, his room was scattered, just like a wrestling field, and I saw Emeka laying lifeless with a knife stained with blood beside him. This was between 5:40pm. “This happened barely one week after our generator was stolen.” Speaking on the victim’s lifestyle, the apprentice said the boy was an easygoing boy with no social life. He explained that the victim could be at home the whole day and no one would know he was around, adding that he spent his time sleeping and when he was awake he would be on his laptop. Speaking further, Chubuike said Emeka dressed very simply and even when his mother got him flashy wares he refused to put them on. “Whenever he goes to church, he was more comfortable being in simple wear. “The only time he had ever complained something to me was when he lend a friend his laptop because he had two. “The friend’s laptop got spoilt while coding because they were being taught coding in school, and Emeke lend him one of his laptops. “But when it was due for the classmate to bring it back, he was delayed. Emeke came to me, and I followed him to meet his friend and demanded the laptop, which he gave back,” he added. It was gathered that Emeka’s remains have been taken to the mortuary while homicide detectives from the State Criminal Investigations and Intelligence Department, SCIID, Panti, Yaba, have taken over the case. Meanwhile, the state Police Public Relations Officer, SP Benjamin Hundeyin, who confirmed the incident said no arrest had been made so far, but investigations are already ongoing.