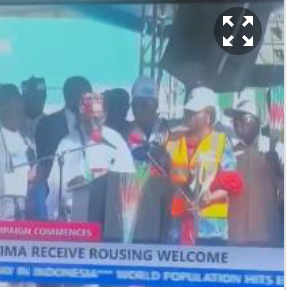 Age is seen to be out of place when politicians in Nigeria dish out their plans to suit the procedures for the gimmicks being used to persuade the electorates toward believing their agenda for the country.

Politicians, therefore, scamper for support and votes, while dishing out mouth-watering promises to the populace.

The invents surrounding the campaigns, elections, and post-electioneering experiences with regards to the anticipation of the masses from the public office holders, are what would later be stories to bemoan. While old age deters a lot of leaders from carrying out their mandates.

Recently, the candidate of the ruling All Progressives Congress APC, Sen. Ahmed Bola Tinubu was reportedly playing on words at a presidential campaign rally televised on TVC.

Tinubu was heard surprisingly praying for the People’s Democratic Party PDP, instead of the All Progressives Congress APC.

The video has a lot to tell about the age effects on Sen. Bola Tinubu.

Consequently, Nigerian Skit makers have again gotten another idea to work on.
Anticipate it!