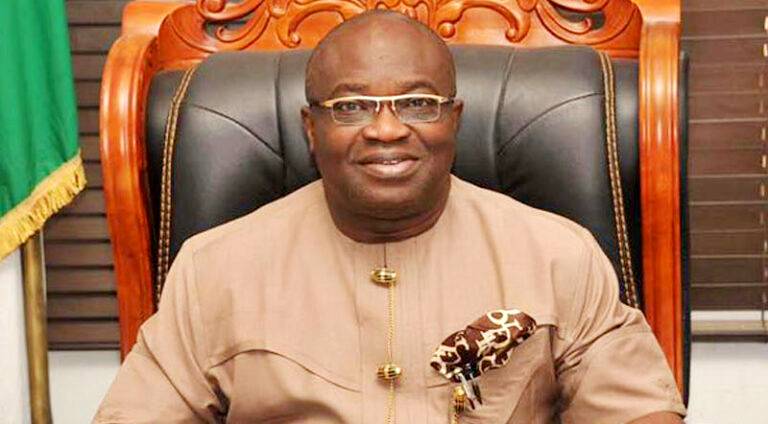 AHEAD of the 2023 general election, Abia State Governor, Dr. Okezie Ikpeazu, has urged the people of the Abia South senatorial district to elect him to the senate, promising to bring more dividends of democracy to the zone.

Ikpeazu, who made the plea at the Abia PDP zonal rally in Aba, also commissioned the rehabilitated Azikiwe road in the city and disclosed that his strategy for the 2023 general election is to commission projects during campaigns.

He explained that the 2023 elections are no longer about rhetoric and long stories, but for candidates to show their achievements recorded.

Ikpeazu further pledged to tackle the problem of the Customs officials who harassing importers from Aba who had paid duties on the roads in the zone as well as the dilapidated state of federal roads linking neighbouring states.

Noting that his administration has done many roads which were impassable before he came to office, Ikpeazu disclosed that with the caliber of PDP candidates in the 2023 general elections, the people of the Abia South would enjoy more dividends of democracy.

He said;“The people of Abia South have seen the representative that they will send to Abuja in 2023. What the people need is performance, not rhetoric and promises. Our strategy for the 2023 elections is that we will be commissioning projects as we campaign.

“Soon, we will open and commission the road that leads to Eziukwu market. Before the end of the campaign, we will also open Omuma road. I have come to show the people of Aba the projects we have done so far and the ones we will tackle in the coming days.

I stand on the works we have done; Umuola, Ukaegbu, Ehere, Ovom, Kamalu, Umule , Osusu , Eziukwu, Milverton, Ojike, Ngwa and Azikiwe which is being commissioned today.

“We are also on Obohia and Ohanku roads. I’m pleading with the people of Aba to send me to Abuja that I’m will bring dividends back home. We no longer want rhetoric and long story. No more long story, show us your handwork. Show us what you have done.

I will deliver functional street lights to the people of Aba, not the ones that aren’t working as some people have done.

“There are many street lights that were gotten from Abuja and installed in Aba, that aren’t working. Aba is not a dumping ground. I will serve you with humility and the fear of God.We want a leader, not a ruler.I has lived here with you for the past seven years. This is why I know where more works are needed. We have not done all the works in Aba, we will do more roads including Uratta before the end of our tenure. We will solve the problems confronting importers in Aba which is the issue of Customs harassing our people on the road after they have cleared their goods at the ports. I’m the best candidate to be sent to Abuja because I will deliver the goods. I feel encouraged by your support. I have offered myself to serve with the fear of God. I want to reach a covenant with the people of Abia South that I will change the narrative. They said that there is nothing in the Senate, but I will prove them wrong. We will also raise the issue about the poor state of the federal roads linking Abia South to neighbouring states.”

Earlier, Chairman of the Peoples Democratic Party, PDP in the state, Hon. Asiforo Okere, who congratulated Ikpeazu for his numerous achievements, assured that the PDP would win the 2023 general elections in the state.

In the interview with journalists, Majority of the State House of Assembly and candidate for the Obingwa East state Assembly, Chief Solomon Akpulonu, who stated that the PDP fielded popular candidates, insisted that the party has no opposition in the elections.
(Vanguard)