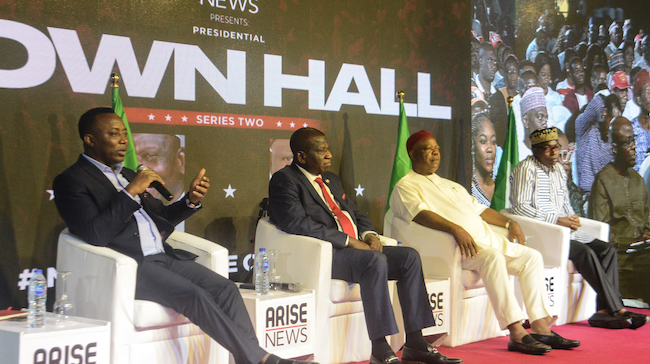 They also vowed to adhere to the rule of law and eliminate poverty while focusing on the development of the education sector.

The candidates stated these during the Arisetv town hall for presidential candidates, which was held in Abuja.

The debate was organized in collaboration with the Centre for Democracy and Development and various media organizations.

Stating that the intelligence agencies were not doing enough in the area of intelligence gathering, Sowore said his government would tackle banditry if elected in the 2023 election, noting that fighting banditry and insurgency was not rocket science if intelligent people were in charge of the security agencies.

According to Punch, the ACC candidate alleged that the Department of State Services was not doing enough in terms of tackling the security challenges facing the country.

He said, “I was detained by the DSS for five months. They were there watching BBNaija (reality tv show) instead of collating intelligence, analyzing, and using that to stop terrorists and bandits. We don’t have a commander-in-chief of the armed forces as of today. What we have is an arranged system of security in which everybody is doing what he likes. That’s one aspect of it.

The AAC presidential candidate also urged the Nigerian government to resolve the issue of hunger and poverty before deploying guns to stop insecurity.

On his part, the ADP standard bearer, Sani alleged that the President, Major-General Muhammadu Buhari (retd.) was presiding over a corrupt government, noting that the Nigerian National Petroleum Corporation Limited was the linchpin of the graft in the country.

If elected, Sani said no one would be above the law ‘’as corruption will be dealt with, thereby eliminating poverty and improving the security situation in the country.’’

He said, “Take, for instance, our security outfits today. Unfortunately, it is lopsided in terms of the leadership that you have in dispute. So, as the next president, I will govern with rule of law and that means that nobody would be above the law.
Credit: Punch.