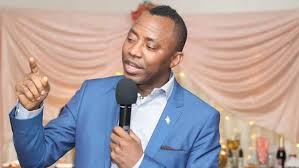 AHEAD of the 2023 presidential election, the candidates of various political parties including Omoyele Sowore of the African Action Congress AAC, have disclosed the practical plans to assuage the numerous challenges confronting the peace, unity, and prosperity of the country.

Sowore at the second in a series of town hall meetings organized for presidential candidates of all the political parties by the Arise News Channel and its partners, which took place yesterday in Abuja, firstly stated that his administration would ensure a new constitution is evolved to include state police and address other important issues missing in the present 1999 constitution as amended

Sowore among the four candidates who took their turns to speak on how they intended to overhaul the nation’s economy and her security architecture if elected president next February, affirmed that the security challenges of the country would be things of the past as soon as he becomes in charge.

Among the candidates, who participated in the town hall meeting held at the Transcorp Hilton, Abuja, was Omoyele Sowore of African Action Congress, Prince Adewale Adebayo of the Social Democratic Party, Yabagi Sani of Action Democratic Party and Prof Peter Umeadi of the All Progressive Grand Alliance.

All, however, agreed that to move the nation forward from its current state, then, two things would have to be addressed as they were germane to the progress and development of the nation and they are the economy and security.

According to Sowore, the current Nigerian constitution was illegal, null and void and a fraudulently imposed document by the military, adding that Nigerians could only be united if foundational problems in the constitution were addressed.

He said, “In 1992, we gathered – Mike Ozokheme, Gani Fahwhemi, and others; we wanted to have a sovereign national conference because we were tired of the Nigerian constitution, the military sent soldiers to come and beat the living daylight out of us. In 2023, we need a new constitution. We cannot continue like this.“On uniting Nigerians, we have foundational problems; this is a country put together by outsiders. We never got it right from the beginning. What’s going to unite Nigeria is a new constitution. People must find identity in that document, they must know, where they belong, and they must have a right exit, for example, a bad marriage. You can’t force people together by creating ministries that do orientation; you do it by way of justice.

“On State police, I will let Nigeria create its constitution that’s not a fraudulent document as we have now. It will address the issue of state police, and local government police. When we do this, we can train all of them in a unified way devoid of governors’ control.

Responding to a question on managing Nigeria’s rising debt profile, the AAC presidential candidate, said, unnecessary money being wasted should be stopped, saying, his administration would abolish the senate and security votes and channel those monies to the education sector
While claiming that oil companies were owing about $6.4 billion in taxes unpaid to the federal government, Sowore said his government would stop investing in irrelevant things, such as pilgrimage.

His words: “Our debt to GDP ratio is not out of control, our problem is revenue to GDP. It’s because we don’t capture our revenues appropriately. The oil companies are owing about $6.4 billion in taxes unpaid to the federal government.“I want to also inform you that what we call security votes in Nigeria is one of the things I will like to abolish so that the N271 billion that goes to governors will stop. I don’t know who they are protecting with it.“We must discuss our revenue, and what we waste money on. I will abolish the senate so that we can use that money to take care of education. I will stop investing in irrelevant things, I who don’t spend a dime on pilgrimage.”

On oil and gas, Sowore advised the government to focus on energy, particularly, investing in energy mixes, including Solar, Hydro, Bio Fuel. He said, ”The energy transition we need to make, specifically, in four years, my target is to get us away from this miserable seven thousand megawatts of which we can only supply about 3000. Transmission lines are so broken even when we have production…

“Whether I will go precisely is the NLNG. Nigeria is an investor in that company and it’s doing well. Out of the 49 percent we have, they are giving the money to the NNPCL, not to the consolidated account of the federal government.“I want to take that percentage of our dividends and start investing it in energy mixes, including Solar, Hydro, Bio Fuel, and so on and use these mixes to create both employments in four months. I also want to break the national grid.

“I know and I have seen that oil is a product of the past. The rest of the world is moving on, they are creating vehicles, and they use solar. Sunshine, water, and excreta will never go away, wastes can be used to generate electricity. So, for you to have a vision of Nigeria without oil. You must understand that oil is going out of business and energy transition has already occurred.