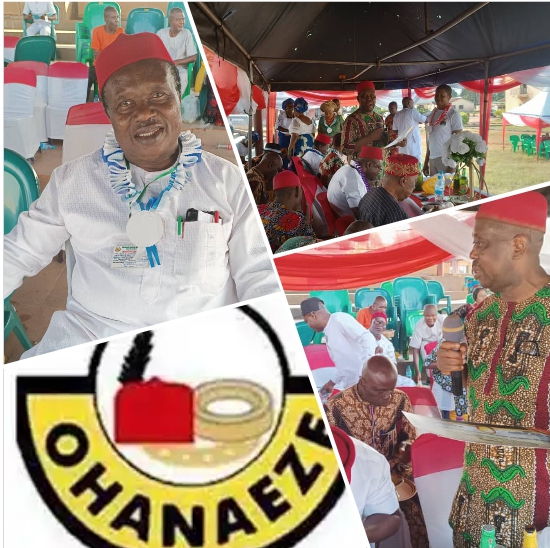 Ohanaeze Ndigbo Worldwide, Anambra State, Anaocha Chapter has inaugurated a new executive who would oversee the affairs of the Organization for the next 4 years.

The inauguration of the new executive members took place on the occasion of the 2022 Ohanaeze Day Celebration, held Saturday, at the Anaocha Local Government Headquarters, Neni.

Ichie Okeke-Ogene popularly known as Idilikidi Mbuze Nanka disclosed that the Ohanaeze Ndigbo Worldwide, Anambra State Chapter was duly structured and informed of the 2022 Ohanaeze Day Celebration and the tripartite programs it featured.

“Ohanaeze has an organogram and the state executive has shown that they are aware of today’s event and that it is fashioned by the State. So, it conforms with the leadership procedures.”

In the issue of the stance of Ohanaeze Ndigbo Worldwide on Peter Obi’s Presidential ambition in the 2023 general election in Nigeria, Chief Okeke-Ogene emphasized the vitality of the topic of the lecture entitled; ‘OSITADIMMA.’

“Our silence has been golden. We have been using the words; Nzogbu Nzogbu, Enyimba Enyi, Mana Onwebeghi Ihe Anyi Zogburu”.

“Ohanaeze has made it very clear during their IME OBI meeting in Owerri that they have no other candidate except Peter Obi. We also believe that Obi’s Candidature is not negotiable.

“During the time of Ekwueme, they were eleven, and Ohanaeze beckoned Igbo members of the People’s Democratic Party, PDP, to prone down the number. Today, we have two candidates. In our last meeting, it was obvious that before, we have been keeping silent and our silence is golden, it’s strategic because, we want to watch other Sociocultural Organizations whom we have supported their candidates; We have supported the Yoruba candidate, Niger Delta Candidate, Fulani Candidate, and Hausa Candidate. We now wait and see whether they will appreciate our support.
“Now, they are the people who are carrying out this campaign, so, there is no way we can lack behind, have to key into that.”
“Ohanaeze is taking on merit by backing the most prominent/, Mr. Peter Obi.

“Ohanaeze believes that Peter Obi is a Nigerian Candidate. Remember, Obi said that nobody should vote for him because he’s Igbo rather than on merit.” Ichie Okeke-Ogene said.

Earlier in his acceptance speech, the new president of Ohanaeze Ndigbo Worldwide, Anaocha Chapter, Engr. (Chief) Ben Nnia Onugbolu (Ichie Okenwa Amuluoha), appreciated the attendees, especially the National and State representatives of Ohanaeze Ndigbo Worldwide, as well as the good people of Anaocha L.G.A. of Anambra State, friends and well-wishers for their support towards the success of the event.

The President who earlier extolled the progress and rapid development being championed by Anambra State Governor, Professor Soludo led administration, affirmed that the goal of Ohanaeze Ndigbo has always been for the general interest of the entire Ndi Igbo in the diaspora.

He, however, concurred with the fact that Ohanaeze Ndigbo Worldwide, has sometimes in the past been passive in taking a bold stance in National political leadership in the country while reassuring the people that the era of silence and passivity is over.

The epic event featured tripartite programs including the Inauguration of the Anaocha Local Government Chapter Executive and its Patrons, a Lecture entitled “OSITADIMMA”, an Award Presentation, and Outstanding Recognition of eminent and distinguished sons and daughters of Anaocha.