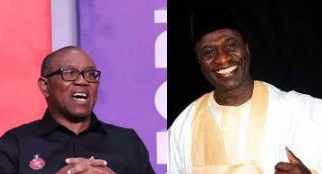 AHEAD of the February 25th Presidential election, one of the close political associates of Muhammadu Buhari when they were both in the defunct All Nigeria Peoples Party, ANPP, Mr.Emmanuel Arigbe-Osula has expressed optimism that Mr. Peter Obi will be elected the next President of the Federal Republic of Nigeria to succeed, Mohammadu Buhari.

It’s worthy of note that almost eight years after, Arigbe-Osula is full of regrets but has not given up hope and is now pressing full throttle for Peter Obi asserting that he is the only one among the prominent presidential candidates with the potential of reversing the rot he claims is the legacy of the Buhari/APC administration.

In an exclusive interview with the Vanguard, Arigbe-Osula revealed the following:

You were an early canvasser of Muhammadu Buhari from your days together in the ANPP as deputy minority leader in the House of Representatives. Are you satisfied with his performance as president?

Like most Nigerians who supported Buhari and APC to be elected President, we expected to see a time of broad discipline and anti-corruption in all facets of our society not the most corrupt, most insecure, extremely polarized and the toughest time in the history of Nigeria that it turned out to be.

Three presidential candidates are in the frontline to succeed Buhari. Who do you think will make a better job and why?

It’s a no brainer. I can tell without any reservation that Peter Obi is far better for the redirection of our country than Bola Tinubu and Atiku Abubakar.

His antecedents, vision, integrity, the energy and passion to succeed speak to this fact that he is the undisputable and right person for the job. The selfless and weighted achievements of Peter Obi in Anambra State when compared to those of Tinubu’s in Lagos State clearly show that Peter Obi has unimpeachable integrity, the right physiological, mental, ideological, and unrelenting drive needed to redirect Nigeria from the current extremely precarious state.

Voting anyone else apart from Peter Obi will simply make one an accomplice to perpetuating the undeserved suffering of Nigerians with even more catastrophic consequences to our individual and collective existence as nation.

President Obasanjo has recently endorsed Mr. Peter Obi. Do you think that the endorsement is befitting?

The endorsement is not only befitting, but the sane choice to make in this situation. Obasanjo has all that it take to selflessly and conscientiously make that choice for the overall good of Nigeria

Many have raised objections to Obasanjo’s endorsement of Obi. Do you agree with those who say that he lacks the moral fibre to put forward such an endorsement given his alleged role in the Third Term brouhaha?

Without mincing words, no Nigerian living or dead has made more known sacrifices to promote and uphold the collective unity of our Nigeria state than Obasanjo. I am also not aware of any that is more befitting to speak to the needed values of who should be hired by Nigerians to get us out of the treacherous hole that the Tinubu led APC and Buhari’s administrations have submerged Nigerians and our country.

There is no doubt that a lot of far-seeing Nigerians saw great leadership qualities in Obasanjo, and that may have spurred their desire to giving him a Third-term for the short-term gain of our country.

However, entertaining the thought and proponents of the Third-term was his only slight blemish not a damage or erosion of his insurmountable achievements and proven love for the prosperity and unity of our great country.

This is a man who put his life on the line to fight in the civil war. He offered to be retired to have someone else succeed Murtala instead of himself, but was urged on by others to succeed him.

He stands out as the first of only two Nigerian military Head of State to handover to a true democratic government. He then stayed completely out of politics until after the dubious nullification of the MKO Abiola’s well deserved victory.

Unlike many others, he stayed in Nigeria to speak out against the ills of the Abacha government which cost him his freedom and almost his life.

He served Nigeria for 8 mostly peaceful and prosperous years despite the shortcomings of the PDP. Lest anyone forget, Obasanjo did not form PDP nor did he assemble the characters that led PDP.

Yet the success achieved under such an assembly of ideologically incompatible people is highly applaudable. Most of the Obasanjo attackers are only doing so to defend their paymasters and their sources of bread and butter.

Apart from God, if only one person were to be chosen to impartially qualify a Nigerian to govern Nigeria, it should be no one, but Obasanjo.

Actually, you were a major opponent to the Third Term push. Do you have any regrets as to your position at that time.

I do not have any regrets regarding my decisions to vehemently oppose Third-term. I consciously before God took an oath of office which demanded that, I uphold the Constitution of the Federal Republic of Nigeria, and Fundamental Objectives and Directive Principles of State Policy contained in it.

I did as I swore to do, and my conscience is clear and without regrets. If Obasanjo’s Third-term desire met the Constitutional provisions, events afterwards to date especially under my party APC are definitely cause for regrets.

Critics say that Obi has no structure to deliver a presidential election victory. Do you share that view?

That is arrant nonsense. The collective card carrying members of all political parties in Nigeria as a ratio of the population of voters is very small. The structure that they are alluding to is the organized criminal oppression of our society through vote buying, violent harassment of voters and systemic manipulation of results. They have promoted poverty as a tool to perpetuate their fraud for generations, but their cup is now full. In private discussions, they are aware of the determination of Nigerians using Peter Obi to take back our country from years of reckless hostage by those leading PDP and APC who have with impunity appropriated the collective wealth of Nigeria to themselves, their families, cronies and cohorts.

In the words of King Sunny Okosun, Nigerians is now or never…”. The dubious political elites are jittery and indeed very scared that this is mission impossible for them. The common man in Nigeria will all vote Peter Obi no matter who returns some of their stolen money to them. The commitment of Nigerians to save Nigeria now has made the Obidient movement the best structure everywhere in Nigeria.

What are your projections for the poll? Do you see your native Edo State turning Obidient?

Edo State is the most Obidient state in Nigeria. I have no iota of doubt that Peter Obi will be elected the next President of the Federal Republic of Nigeria to succeed, Mohammadu Buhari, to the glory of God.