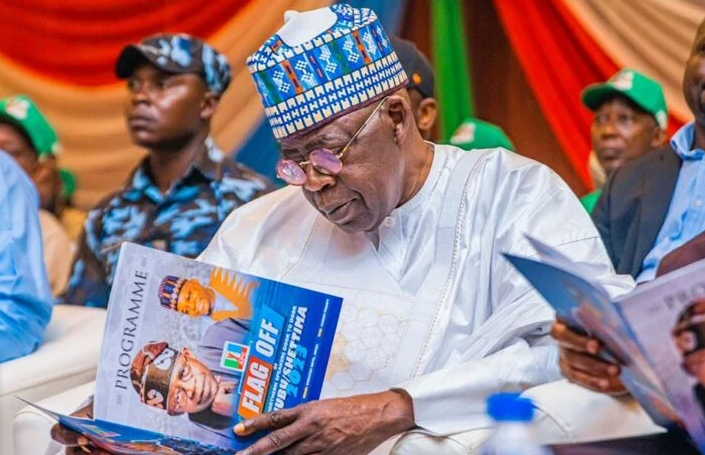 THE Presidential candidate under the platform of the ruling All Progressives Congress APC, Sen. Ahmed Bola Tinubu is being faced with mammoths of opponents allegedly holding on to the forfeiture of an ill-gotten whopping amount of money about 30 years ago, to force him out of the presidential race.

De Erudite Media learned that a viral document released by the United States District Court for the Northern District of Illinois identified Tinubu as a defendant in a court case accusing him of involvement in drug trafficking.

Although, the spokesperson for the Tinubu-Shettima Presidential Campaign Council, Festus Keyamo, had faulted the document, arguing that Tinubu was not indicted in the matter and had no case to answer.

The Peoples Democratic Party (PDP) has asked Bola Tinubu, presidential candidate of the All Progressives Congress (APC), to withdraw from the race.

Speaking on Sunday at a media briefing, Debo Ologunagba, PDP spokesperson, said the forfeiture of funds by Tinubu to the US government shows that he committed infractions that disqualify him from running for president.

It’s on record that the social media platforms recently were flooded with what appeared to be certified true copies of a settlement order issued by a US court domiciled in the northern district of Illinois regarding forfeiture of funds in some bank accounts to the tune of $460,000 linked to someone named “Bola Tinubu”.

Responding to the development, the spokesperson of the All Progressives Congress (APC) presidential campaign council, Festus Keyamo, debunked the claims that the forfeited funds were linked to allegations of illicit drugs.

He, however, said the funds forfeited by Tinubu to the US government were tax deductions.

Nonetheless, the PDP spokesman criticized Tinubu over the said forfeited funds, adding that the APC presidential candidate must withdraw from the presidential race and apologize to Nigerians.

“What Nigerians expect of Asiwaju Tinubu at this moment is to withdraw from the presidential race and apologize to the nation,” he said.

“The APC must come to terms that it is not in the presidential race and that it has no legitimate candidate at all levels in the 2023 general election as pronounced by the federal high court.

“The PDP, therefore, reminds Nigerians that any vote for the APC at the presidential, governorship, national, and state assembly elections are wasted votes that will not count at the end of the day.

“The PDP calls on INEC not to succumb to the blackmail of the APC but to be focused and carry out its duties by the constitution and the electoral act so as the engender confidence in the citizens concerning the integrity of those seeking public office in our country.

“It is instructive to note that trafficking in narcotics is an international crime to which all nations are obliged and mandated to apprehend, prosecute and enforce any judgment or court order imposed on the offender.

“Nigeria, being a signatory to the international convention on trafficking in narcotics, is obliged to enforce any order or judgment imposed on any offender by a competent court anywhere in the world.”

Recall that a chieftain of the Peoples Democratic Party (PDP), Daniel Bwala, had earlier expressed no doubts about the possibility of the Lagos political maverick being dropped off his ambition upon the alleged drug trafficking link to his name.

According to the spokesperson for PDP’s Atiku Abubakar/Ifeanyi Okowa presidential campaign, drug trafficking, whether in Nigeria or abroad, is a criminal offense and if found guilty, Tinubu may lose participation in the coming presidential election.

Naija News, however, gathered that Bwala came to this conclusion in reaction to the controversy surrounding the All Progressives Congress (APC) presidential candidate.

The document contained evidence of Tinubu’s alleged involvement in narcotics and money laundering about 30 years ago.

According to Bwala, who was live on Channels Television’s Politics Today said: “I’m afraid that this case concludes that, from the eyes of the law, Bola may be disqualified from contesting if the matter goes to court.”

He added saying, “Narcotics and money laundering, whether in Nigeria or the United States, is a criminal offense.”