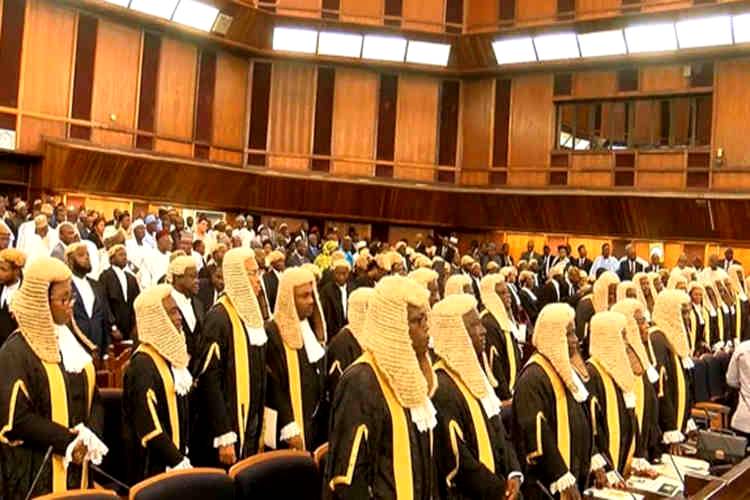 The Body of Senior Advocates of Nigeria, BoSAN, on Monday, called for the establishment of a National Constitutional Court that will be saddled with the responsibility of determining all election-related cases.

The legal body, which made the demand at a special court session of the Federal High Court held to mark its 2022/2023 legal year, decried that many matters, including fundamental right enforcement suits, have continued to suffer adjournments, owing to the plethora of political cases that are flooding the high court.

BoSAN maintained that the constitutional court, which exists in several countries, would upon its creation, be like the National Industrial Court that exercises jurisdiction on matters related to unemployment and other industry-related matters.

It said: “The founding fathers of our democracy and those who fashioned the specialized and exclusive jurisdiction for the Federal High Court did not envisage the aberration of cases on political disputations arising from lack of internal democracy, political shenanigans, and impunity in the management of political parties, as one that will interrupt this court from doing its constitutional duty.

“With all humility, we have reached a stage when very urgently, the Parliament, Judiciary, and stakeholders in the administration of Justice should consider the establishment of The National Constitutional court of Nigeria.

“The Constitutional cowill handled all constitutional, political, and election matters. It will be a Federal Court, of the status of a High court with divisions in all the states of the Federation and the Federal Capital Territory.

“The Court will have unlimited jurisdiction to determine all causes as relating enforcement of or connected with the interpretation of the Constitution, enforcement of fundamental rights of the citizens, determination as to whether any person has been lawfully elected into any office from the President to the State governors and members of all the Legislative houses.

“The Court will be like the National Industrial Court of Nigeria that exercises jurisdiction on matters related to employment and other industry-related matters.

“There will no longer be the need to take away about 500 judges from their normal court responsibilities to sit on Election Tribunals all over the country.

“We have enough human resources to serve the Court in all capacities There exist Constitutional courts in many countries of the world, where such jurisdictions as proposed function effectively to relieve regular Courts of political cases.

“In all these countries, records are available to show that Constitutional courts have become a solution that enhances jurisprudence, specialization, and promotion of political stability through judicial interventions.

“Nigeria is perhaps the only country in the world where litigation on political disputations including election causes is the highest in the world.

“The Courts including the Supreme Court have constituted the most reliable pillar of support for the practice of democracy since 1999”, BoSAN added in its speech that was read by Chief Adegboyega Awomolo, SAN.

Besides, the SANs noted that the 1995 Constitution that was promulgated by the Federal Military Government under General Sani Abacha, made provision for the establishment of a Constitutional Court.

“With hindsight, one can safely say that it was a grave error, an unfortunate one for that matter that the Court was not established in 1999 when General Abdulsalami concluded the Military Governance in Nigeria.

“We believe the advantages of a National Constitutional Court are too great to be ignored at this stage of our constitutional development.

“The Court will be busy all through the year, specialization in the Bench and the Bar will help the country politically and jurisprudentially.

“Twenty-three years of uninterrupted political governance have allowed making structural adjustments remodeling of the Courts and administration of justice.

“The Country will benefit from the gains of jurisprudential literature and experience of the Judiciary.

“The cost of establishing and maintaining this Court will be equal to the sum being wasted on the provision of logistics, convenience, and security for judges, hundreds of support staff who are made to traverse the length and breadth of Nigeria to adjudicate on political and election cases.

“We urge that this suggestion be given national conversation, to encourage the Parliament to turn its attention to policies that will strengthen the structure of our administration of justice”, the legal body added.