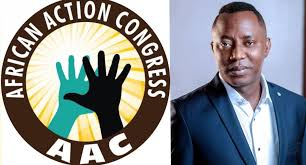 In a bid to consolidate the structure already built ahead of the 2023 general election, the presidential candidate of the African Action Congress AAC, Omoyele Sowore is calling on the good-spirited Nigerians and lovers of justice in the diaspora to embrace the occasion of the mega-fundraising as the party eyes victory in the upcoming general polls.

Sowore has declared open the AAC Campaign fundraising to be held on Zoom, Sunday, the 13th of November, 2022, at 5 pm.WAT and 12noon EST, respectively.

Recall that Sowore who is also the founder of one of the online leading media known as Sahara Reporters has contested over and again for the number one position in Nigeria.