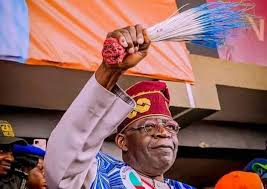 AHEAD of the 2023 presidential election, a series of events avail people the opportunity to air their views on the polity.

Consequently, Nigerians including the pioneer Chairman of the Economic and Financial Crimes Commission, Nuhu Ribadu, has taken their stance on the choice of candidates to vote for in the February 25 polls.

Nahu Ribadu has to this effect, described the presidential candidate of the All Progressives Congress, Bola Tinubu, as the most saleable candidate in the race.

Ribadu disclosed this at the official inauguration of the 132-member directorate of the council which took place at the PCC campaign office in Abuja and was officiated by a former Osun State governor and former interim national chairman of the APC, Chief Bisi Akande.

Ribadu who described Asiwaju Tinubu as an accomplished human being and a thoroughbred administrator and maverick politician, however, urged him not to underestimate the candidates of opposition parties ahead of the 2023 election.

This is even as he expressed optimism that the February 25 polls will be a walkover for the former Lagos State governor.

Meanwhile, Ribadu, who doubles as the Director of Stakeholder Relations for the APC Presidential Campaign Council, gave the warning at the official inauguration of the 132-member directorate of the council.

While stating that Tinubu would win the presidential election with a landslide margin, going by the level of grassroots work done so far, the former anti-corruption tsar, however, cautioned that no candidate should be taken for granted.

He said, “We should not underrate our opponents. We should work assiduously to make the margin of winning too wide that the victory will be massive and sweet. Luckily for us, our job is cut out for us. We have the most saleable product in the market today. There is no one candidate out there that is better than our own.

“Asiwaju Tinubu is an accomplished human being and a thoroughbred administrator and maverick politician. He has something to show from his glowing antecedent, he will not learn on the job.

“He also has a wide network of friends and associates everywhere in Nigeria, which makes our job of outreach very much easier. Though this election is a walkover for us, we should not leave anything to chance.”

According to Punch, Ribadu while urging the 132 members of the directorate to work harmoniously as one family in an atmosphere of cordiality, explained that they were drawn from various fields of human endeavors.