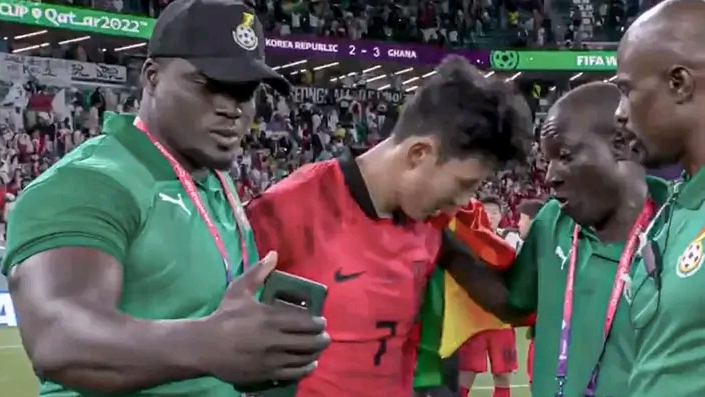 The negligence display of South Korean striker Son Heung-min when approached for a selfie by Ghanaian Couch, shortly after the game between the two countries has sparked negative reactions from the Africans.

Ghanaian Couch, Otto Addo has approached the South Korean forward, Son Heung-min for a selfie after handing them a 3–2 defeat in favor of Ghana.

However, Son who was not satisfied with the outcome of the match glaringly snubbed his former boss, Otto Addo.

Recall that Ghana coach Otto Addo has earlier expressed satisfaction with Son Heung-min ever since he coached the South Korean forward at the youth level.

Meanwhile, the circumstances surrounding the two as they reunited on Monday when Ghana met South Korea in Group H at the FIFA World Cup at Education City Stadium have left many with reservations.

Ghanaian coach took a selfie with Son Heung-min after the #match 😅look how Africans are treated and yet have chosen not to wake up, only #Biafra can change the way #Africa is viewed outside.” Commentator said.