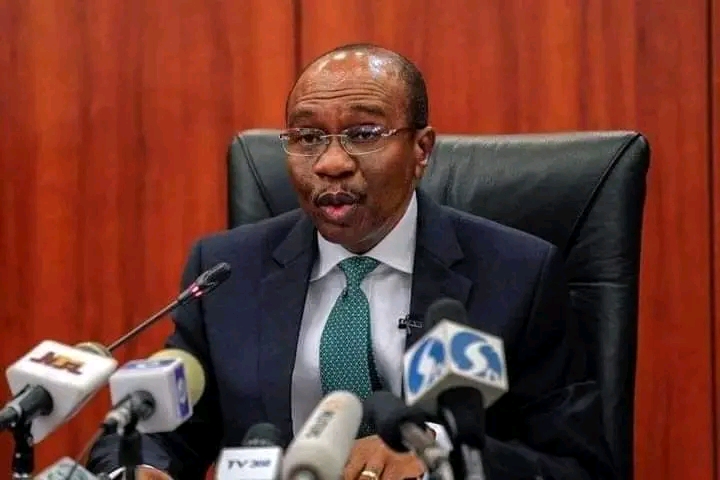 The Governor of the Central Bank of Nigeria, Godwin Emefiele has refused to return to Nigeria amid allegations of terrorism financing and possible arrest and attention by the secret police.

The Department of State Services had applied to a Federal High Court in Abuja, seeking a warrant of arrest for Emefiele.

A Source earlier reported that the court declined the application to arrest and detain the governor of the apex bank, but said it could go ahead and arrest Emefiele if the DSS felt compelled to do so based on its evidence against him.

The security agency said the CBN governor is involved in the financing of terrorism.

Meanwhile, Sahara Reporters earlier on Thursday also gathered that officials of the Economic and Financial Crimes Commission (EFCC) grilled top directors of the Central Bank over their roles in the N2 billion loan given to the National President of the National Cotton Association of Nigeria (NACOTAN), Anibe Achimugu.

According to a top EFCC official, the apex bank directors denied knowing when the CBN governor, Godwin Emefiele approved the loan for Achimugu, adding that it wasn’t discussed during any of their meetings.

The approval of such a loan was also tagged as illegal.

However, sources told SaharaReporters on Thursday that Emefiele had refused to return to Nigeria from the United States, claiming that he has a heart ailment.
Emefiele had traveled to the North American country with President Muhammadu Buhari for the US-Africa Leadership Summit recently held in Washington, D.C.

But while President Buhari returned on Sunday, Emefiele intentionally stayed back, claiming illness amid the allegations and possible grilling facing him at home.

“He was supposed to return to Nigeria yesterday (Wednesday) after traveling with Buhari to the US-Africa Leadership Summit in Washington, D.C.

“He ought to have returned yesterday but he told the CBN board he will return today (Thursday). He wrote the National Assembly that he cannot attend honour their summon due to ill health,” one of the sources told SaharaReporters.

Sources at the DSS also told SaharaReporters that Emefiele is afraid of arrest.

“He refused to return to Nigeria claiming that he has a heart ailment.

“Upon his arrival in Nigeria, he might go on leave until things die down or resign under pressure,” the source said.

However, as earlier reported by Sources in declining the motion ex parte filed by the secret police, Justice J. T. Tsoho, the Chief Judge, said the DSS did not provide any concrete evidence to substantiate its claims that Emefiele was involved in terrorism financing and economic crimes.

The ruling read, “Upon perusal of the documents that constitute the Applicant’s Motion Ex parte dated and filed on 7/12/2022, I am constrained to make the following vital observations:

“1. The entire affidavit depositions, especially as per paragraph 4 of the supporting affidavit, purport that preliminary investigation has revealed various acts of Terrorism Financing, fraudulent activities perpetrated by the Respondent, and his, Involvement in economic crimes of national security dimension. These are no doubt, grave allegations, but the Applicant has not presented any concrete evidence to support them.

“The Applicant should have taken the Court into confidence while seeking the exercise of its discretion in favour of granting Its application. It is my respectful opinion that the ipse dixit of the Applicant standing on its own is not sufficient evidence upon which to deprive a person of his liberty.

“2. The Respondent in this application is named “Godwin Emefiele” without disclosure of his status or position anywhere; not even In the affidavit. It is left to speculate if “Godwin Emefiele” is the same person as the serving Governor of the Central Bank of Nigeria.

If it is, then he is unarguably a high-ranking Public Official In Nigeria and Indeed occupies a sensitive position as one of the key drivers of the Nation’s Economy.

Therefore, an application of this kind should have evidence of the approval of the Respondent’s boss, that such measures are authorized to be taken.

I however do not find such evidence in this Instant application, whereas it is a necessary procedure in the observance of the Rule of Law disclosed in the supporting affidavit.

“This is not the situation here, Godwin Emefiele, the CBN Governor was shown on Television, even last night, having an audience with the President of Nigeria. It, therefore, seems that the Applicant Intends to use the Court, as a cover for an irregular procedure, which is unacceptable.

“In the light of the foregoing reasons, I decline to grant this application Ex parte. If the Applicant believes that the evidence available to it so far is sufficient, then it can as well arrest and detain the Applicant, even without the Order of this Court.

If however, the Applicant desires to still pursue this application, then It should place the Respondent on Notice, considering the sensitive Public Office that he occupies.”

Further exclusive reports say that Emefiele; the President of African Export-Import Bank (Afreximbank), and Prof. Benedict Oramah; among others were under investigation over the $300million the pan-African multilateral financial institution gave to Titan Trust Bank Limited to acquire 93.4 percent stake in the Union Bank of Nigeria Plc.

Others being investigated are Aminu Yaro, a Northern business mogul, and Farouk Gumel.

Sources had told SaharaReporters that the Economic and Financial Crimes Commission (EFCC), the DSS, the Independent Corrupt Practices and Other Related Offences Commission (ICPC), and the Nigerian Financial Intelligence Unit (NFIU) were all investigating Oramah, Emefiele, and others.

In contravention of the CBN act, Emefiele early in the year joined the ruling All Progressives Congress.

The action was against Section 9 of the CBN Act, 2007, which stated: “The Governor and the Deputy Governors shall devote the whole of their time to the service of the bank and while holding office shall not engage in any full or part-time employment or vocation whether remunerated or not except such personal or charitable causes as may be determined by the Board and which do not conflict with or detract from their full-time duties.”

According to the chairman of Ward 6 in the Ika South Local Government Area of Delta State, Nduka Erikpume, the CBN governor had registered as an APC member.

When asked whether Emefiele registered in the APC, Erikpume said, “Yes, he has registered since February 2021. He is our member.”

Amid widespread condemnations, the CBN governor headed to a Federal High Court in Abuja to seek a constitutional interpretation of his non-resignation while pursuing his political interests.

Recently, the secretary of the dissolved Presidential Committee on Reconciliation and Recovery of Stamp Duties Revenue, Kazaure Gudaji narrated how N89 trillion from stamp duties was misappropriated and diverted by Emefiele.