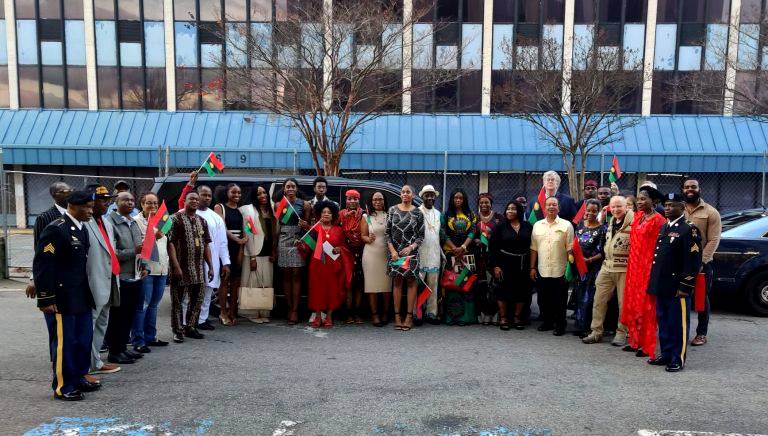 Amidst the topsy-turvy being faced by the leading group for the actualization of a sovereign state of Biafra, hope is not dashed as the movement keeps blossoming daily across the globe.

To this effect, a group of Igbo residents in the United States has inaugurated a Biafra House in Oxon Hill, Maryland, Washington DC, US.

The group said the Biafra House was newly created “to serve the Biafran people and bring international services to people and nations who are friends of Biafra.”

A source who spoke on the condition of anonymity told Vanguard on Friday that, “The Biafra House is officially opened for business to the public, including Government Administrative Matters, Diplomatic Protocol, International Relations, and Security, amongst others.”

Vanguard also learned that the Biafra House was formed to cater to Nigerians of Igbo extraction in the US and in the Diaspora to get positive interactions with the international community through collaborative efforts.

According to the source, Igbo people from all walks of life graced the inauguration on November 12, 2022.

“The Biafra House will be interacting and providing services to local, as well as governments and the International community through partnerships, pending when the United Nations and other world bodies may compel the government of Nigeria to effect a plebiscite for Biafran people.

“The highlight of the opening ceremony was the creme de la creme of people holding political positions from different nations, business moguls, and current and retired U.S. military personnel, some of who are of Biafran stock.

“Other side attractions at the opening ceremony, besides the traditional cutting of the tape and prayers, were the traditional and cultural dances displayed by Biafrans.”

“Local and international media houses were not left out, as they added colour during the grand opening,” the source added.
(Vanguard).