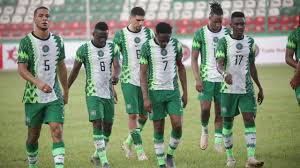 Rohr endured a frosty relationship with Pinnick during the latter part of his reign in charge of the Super Eagles. The German was fired last December after guiding the Super Eagles to the playoff round.

The Nigerians wobbled through the qualifiers losing at home to the Central African Republic and were also forced to a draw at home by Cape Verde.

Former Super Eagles defender, Austin Eguavoen took charge of the National Team in an interim capacity and the team eventually failed to qualify for the mundial after losing on away goal rule to the Black Stars of Ghana.

“Pinnick said my dismissal will avert a disaster, but in the end, he created the disaster that cost Nigeria the ticket to the World Cup,” Rohr told Eagle7FM Sports Radio in an interview anchored by Osasu Obayiuwana.

“It was not my decision, it was a decision by Pinnick and his board.

“He was punished for this as Nigeria lost the chance to win the AFCON and did not qualify for the World Cup.”

Rohr was linked with the Mali national team coaching job after being sacked by Nigeria but he lost out to Eric Chelle.
The former Gabon and Burkina Faso tactician recently stated that he is open to coaching.
He will, however, be in Qatar for media work.