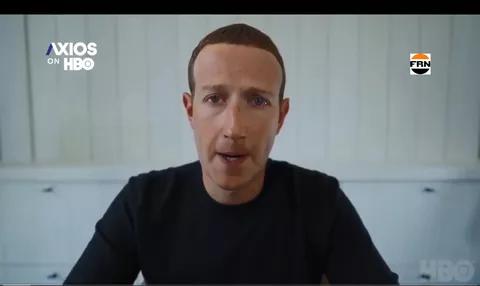 In a disturbing round of interviews that Facebook CEO Mark Zuckerberg conducted with two media outlets, he delivered an extraordinarily bizarre and outrageous message to the American public.

Zuckerberg came out in a a dystopian Farenheit 451 uniform, with a brutalist white utilitarian background, projecting as much corporatist power as his low-T neurosis-stricken self could possibly muster.

Facebook, he says, has the authority to censor an announcement by the President-Elect that he has won the election on election night. He cites that this is because it may take ‘days or even weeks‘ for the millions of unsolicited mailed-out ballots to be properly harvested and sent in by the post office, even as there has not yet been a determination that mailed-out ballots will be deemed admissible.

Zuckerberg Bribes the Post Office and Holds the Public Ransom to His Desired Election Result
To make sure the US Post Office knows which ballots to throw away and which ones to doubly-stuff, he has sent the USPS some $300 million while at the same time supporting an investigation into the Post Master General’s potential corruption, to make sure the Post Master gets in trouble if he doesn’t understand what that $300 million is supposed to purchase.

We know that ‘contact tracers’ and NGO employees alongside those staff employees of organized labor (who habitually act against the real interests of labor union members), will be engaged in mail-box stuffing.
Just think of how ‘brilliant’ this sinister plan is. Why worry about stuffing ballot boxes, when we can just turn  mail-boxes into ballot boxes? These are in plain site, in public, and not policed (for now), and anyone can stuff them full of harvested ballots with forged signatures or signed under the watch of an NGO, labor, or contact tracing employee.

Union Members Aren’t to Blame – They Deserve a Real Fighting Labor Movement
Again, this is truly sinister on many levels, because the actual members of labor unions do not want this, and labor unions have failed them for decades as these bureaucrats have become little more than corporatist functionaries of the DNC, and not genuine representatives of the working class. And yet they know that the public back-lash against this anti-democratic move will see the public’s attitude towards labor unions decline even further. Labor leaders are fine with this so long as the rotating door keeps spinning between labor and corporate management, think tanks, and beltway politics. These people are truly sick.

“What we and the other media need to start doing is preparing the American people that there is nothing illegitimate about this election taking additional days or even weeks to make sure all the votes are counted,”  Zuckerberg said during an appearance on “Axios on HBO.”

“In fact, that might be important to make sure that this is a legitimate and fair election,” he added.
Zuckerberg is like Gates – No One Elected them and they Speak Well Outside Their Field of Knowledge
Zuckerberg is not an elected official and is not an attorney. Yet the media allows him to express his legal and political opinion, and treat his publication – Facebook – as if it were a part of government, even though he cannot now skirt FCC and related regulations.

Zuckerberg says that his social network will be deploying a constant barrage of propaganda to convince the public that the vote is legitimate only when he says it has been determined so by the fake news outlets that comprise the National Election Pool.

Zuckerberg says that he is committed to using his publication to convince Americans that the candidate who declares himself the winner based on election night returns, will be censored on Facebook so that Americans do not have access to this  information on who the winner of the election is.

“So if one of the candidates in any of the races claims victory before there’s a consensus result, then we’re going to add some informational context to that post directly,” Zuckerberg said.

This term ‘consensus result’ is where the situation gets extremely murky, and Zuckerberg – visibly frightened and shook in both of his interviews – is probably aware that he is involved in election suppression and interference – a federal crime punishable by years in the penitentiary.

“I think this is important because there is, unfortunately, I think, a heightened risk of civil unrest in the period between voting and a result being called or after that, and I just think that we need to be doing everything that we can do reduce the chances of violence and civil unrest in the wake of the election,” he added.

Zuckerberg: “what we and the other media need to start doing is preparing the american people that there is nothing illegitimate about this election taking additional days or weeks to make sure all the votes are counted.”
There is a Color Revolution Coup Underway in the US Right Now
We have closely followed the Color Revolution underway in the US, which is a type of coup-tactic which does not rely on the military per se, although the ‘Spring’ stage – as in Arab Spring – normally involves military involvement and also is part of widespread civil unrest towards a failed state. The next phase of the coup  that the deep state has in the works to remove Trump from office is bending and breaking every imaginable law, in a country where the wealthy and powerful have long been granted a free pass to do just that. What we are seeing now is not the beginning, but the next stage of the collapse of a republic – admittedly a problematic one – but nevertheless a collapse towards something far worse for the lives of everyday working people.

Most of my analysis not on FRN on the nature of this Color Revolution strategy to oust Trump.

In those works, we show how the failure of the DNC to deliver a candidate like Bernie Sanders or Tulsi Gabbard would have the result of creating a volatile social situation on the streets. I wrote these before the Covid-19 plandemic was delivered to the public as part of Event 201. But the basic economic mess by itself, prior to the scamdemic, was evidently going to create what we are seeing now.

Of course all of this was intentional. We should not be surprised that Z-berg is on about this election fraud. After all, he’s been a part of making sure that over one million Americans die from unemployment and healthcare related deaths, as the lockdown crime he’s perpetuated has cost tens of thousands of lives for every one percent increase in unemployment, and hundreds of thousands dead from lack of access to hospitals, sitting empty, reserved for ‘covid patients’.

So what if this election fraud will cause a civil war in which tens of thousands,  at least, will die. He’s fine with that, just as he was fine with the real covid deaths (unemployment, suicide, etc.)
Soros Election Integrity Group
Soros ‘election integrity’ group is behind the promulgation of this term ‘consensus result’, because they have defined it themselves. This is part of the ‘Transition Integrity Project’, which is composed of deep-staters, both neoconservatives and neo-liberals.

The US does not have a standing governmental body which declares the presidential election victor.

The ‘consensus’ that Zuckerberg refers to is the non-binding opinion of the ‘National Election Pool’, along with Reuters, which is like ‘Federal Express’ or the ‘Federal Reserve’ – as they are not federal – the National Election Pool is not national. It is a conglomeration of legacy news outlets. In other words, fake news. Reuters is owned by Canadian oligarch David Kenneth Roy Thomson, 3rd Baron Thomson of Fleet, so now he will be part of deciding who the public thinks is the president.

Trump is not part of the Club anymore
But haven’t these rapacious oligarchs been in charge of the electoral outcome all along? Yes they have, and therein lies the rub. For those undecided on the reality of the Trump administration as an ‘outside force’ separate from the oligarchy, now it should be clear.

If he was ‘part of the club’, then any other sort of natural disaster or foreign threat could be used to manufacture the present scenario if the police-state component was all that was required. If this was all a show, or if the only difference was policy or power for power sake, then anyone would be sane to simply wait him out another four years until 2024, and then get their own agenda on tracks again.

This means that those Trump is up against are in the fight of their lives, willing to stage a coup, mass scale riots, a fake pandemic, and a civil war just to remove him before he can do something to them. What that will be, and why that will be, is for us to find out.

All of these moves we see underway are not because the oligarchs did not have this power before, but because they always had this power and were able to conceal it under the auspices of ‘democracy’. Now that there is an executive branch of government not firmly under their control (emphasis ‘not firmly‘), they are flexing their muscles, and the corporatist mask of democracy has entirely fallen off.

Don’t blame the people of the left – Come Together
Of course the manufactured opposition to an outsider that is taking on endless wars and the deep state, would take on the veneer of ‘left wing’. This is not because Zuckerberg, Soros et al are ‘ left wing’, but because for five decades there has been a whole discursive framework underway which only allows left wing views to have public hegemony in all institutions. It is not the form that matters, not the ideological veneer that matters – but the substance – and the substance is the corporatist police state.

Soros, Gates, and Zuckerberg are psychopaths par excellence, and the truth is, as much power as they have, we have so much more, provided we stand together.

All of Gates money, for example, is only equal to about 3k USD per capita. That is why Americans must stand together at this critical time. The lessons we learn now will enable us for generations to come, to bring about a new era of freedom and prosperity, but only if we fight for it like our lives depend on it. Because they do.

A part of America was taught that socialism was the problem, another part that capitalism was the problem. This is a false  left-right dichotomy which was foisted upon the American people. The American system today is a behemoth, and uses all the worst parts of all the political theories towards the goal of oligarchic control. That is why it appears capitalistic to some, socialistic to others, and fascistic to others still. It is all those things, but none of those things.

This is the final moment, and the last generation that had the last  shreds of freedom,  before the coming storm. And now the storm is upon us. The decisions we make now will determine the future of our country and our world.