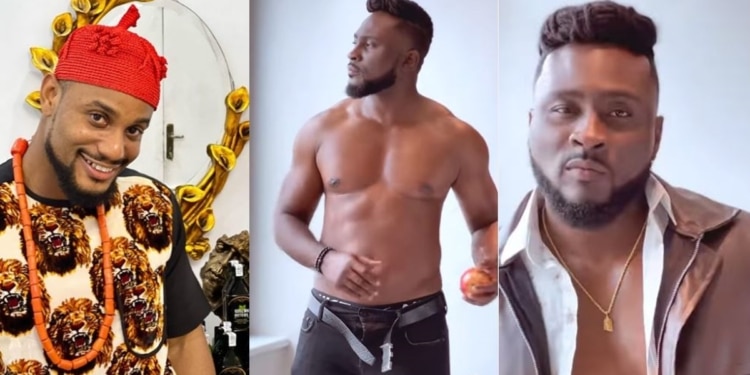 Popular Nollywood actor, Alex Ekubo has thrown a jab at reality TV star Pere Egbi after he shared a video of himself.

Pere had earlier shared an impressive transition video of himself. At the beginning of the clip, the reality TV star was bare-chested as he threw an apple from one hand to another. In the later part of the video, he donned a white shirt and jacket which gave a good fitting, and then gradually began devouring the apple in his hand. Captioning the video, he wrote, “When you see this, what comes to mind?”

Reacting to the video, Ekubo took to the comment section to jokingly ask Pere to calm down as he is not the president of the country but simply a BBNaija graduate. He wrote, “Pere relax, na Big Brother you go, no be you be the next Nigerian President.”

If I Retire Today, I Will Still Be Wealthy – Wizkid

Award-winning Nigerian artiste, Wizkid has taken a swipe at some unidentified set of individuals. The father of four lost his cool and reminded naysayers of the amount of wealth he has acquired in his career. Speaking via his official Snapchat account on Sunday, 30th October 2022, he argued that his success and wealth remain untouchable. In the post, the star boy crooner argued that he can decide to retire from music today and still maintain his wealthy status. Taking a swipe at other artists, Wizkid stated that all the “Lil Ni**as” can’t touch his wealth even if they ask their mom and dad for help. He wrote, “I can decide to stop touching the mic today and y’all Lil ni**as can’t touch the wealth. Even if you ask your mom and dad for help. #MoreLoveLessEgo #Everybody’sDaddy.” Speaking further, he stated that he might consider opening a class where he will teach other artists how to get what they deserve while expending less stress and energy. He wrote, “Also soon, I will open a class where I will teach you all ni**as how to get all you deserve with less stress and smart business choices.” The singer maintained that going forward, he should be addressed as sir or daddy before the subject of the post tries mentioning his name. He wrote, “Moving forward, y’all address me as sir or daddy before mentioning my name! Ok babies!”