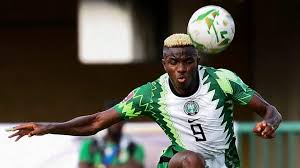 AHEAD of the 2022 FIFA World Cup in Qatar, different countries’ teams have started friendly matches after naming their 26-man squad to clinch the gold medal at the tournament.

The Super Eagles who failed to qualify for the 2022 World Cup after a 1-1 draw with Ghana in the second leg played in Abuja are expected to play an international friendly with Portugal.

Meanwhile, the Former Nigeria international, Mobi Oparaku has suggested that the Nigeria Football Federation, NFF, should sanction Napoli forward, Victor Osimhen for opting out of Thursday’s international friendly with Portugal.

Osimhen who was included in the list for the friendly withdrew and has since been replaced by Cremonese striker Cyriel Dessers.

Despite scoring in Napoli’s 3-2 win over Udinese at the weekend and going off uninjured, injury has, however, been cited as why Osimhen will not participate in the clash with World Cup-bound Portugal.

“This is sabotage. He wasn’t injured, I saw him at the weekend and he was not substituted due to injury,” the 1996 Atalanta Olympics gold medallist told Brila FM, as per Complete Sports.

“Because it’s friendly and we are not going to the World Cup he has come out to say he is not playing. This is sabotage he should be sanctioned.“

Osimhen’s last outing with the Super Eagles was in June when Nigeria overran São Tomé and Principe 10-0 in the AFCON qualifiers in June this year.