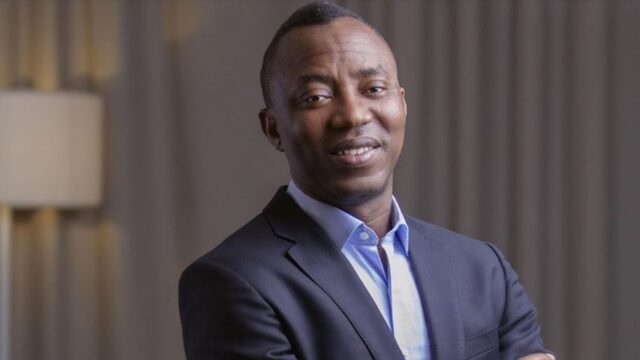 The presidential candidate of the African Action Congress (AAC), Omoyele Sowore, has again called for the legalisation of marijuana.

Naija News reports that the publisher of Sahara Reporters reiterated the call on Friday during a Twitter Space hosted by the National Drug Law Enforcement Agency (NDLEA) on Friday. The AAC presidential candidate stated that beyond the consumption of the substance, marijuana can also be used for the production of medicines, textiles and concrete. Speaking further, Sowore said that even if cannabis is legalised, he would not consume the substance. The human rights activist revealed that he has never smoked marijuana in his life, stating that he is already high on justice already. He said: “I do not consume cannabis. Never smoked cannabis in my life. Even if you legalise it, I’d probably not take it because I think I’m high on justice already. I don’t need to add any more substance to it. “I know all those countries that have legalised/decriminalised growing of cannabis will come and impose their products upon Nigeria whereas Nigeria has some of the best products already.”

2023: Tinubu To Kick Off Presidential Campaign In Kwara

The presidential candidate of the All Progressives Congress (APC), Bola Tinubu, is reportedly set to officially begin his campaign in Ilorin, Kwara State capital. Naija News learned that Tinubu alongside the Progressive Governors Forum, Presidential Campaign Council and members of the APC National Working Committee chose Kwara as the first place to launch the campaign. An APC chieftain, in a chat with The Punch, said the APC stakeholders chose the state during last Wednesday’s tripartite meeting held at the Transcorp Hotel in Abuja. The chieftain, who is one of Tinubu’s loyalists, disclosed that the former Governor of Lagos State and the stakeholders agreed on Kwara state was chosen after careful permutation. He, however, stated the presidential candidate and the stakeholders failed to agree on a date to kick off the presidential campaign in Ilorin.