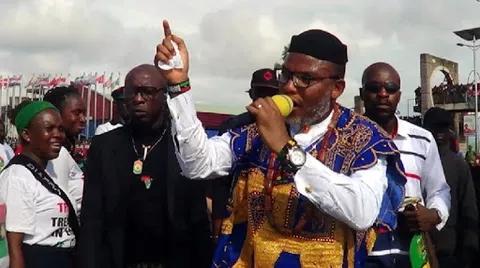 The President of Nigeria did not show up in the 75th Session of the United Nations General Assembly (UNGA) rather he appeared via a pre-recorded message he sent.

Delivering Nigeria’s National Statement, via video-message, on the first day of the 75th session of the UN General Assembly Debate, President Buhari pledged Nigeria’s commitment to working with member states in the spirit of global cooperation and solidarity to promote human health and general well-being.

The theme of this year’s General Assembly is ”The Future We Want, The United Nations We Need: Reaffirming Our Collective Commitment to Multilateralism- Confronting Coronavirus Through Effective Multilateral Action.”

The President described the theme of the General Assembly as most appropriate and timely, noting that it captures the common desire for a renewed and revitalised organisation in need of multilateral approaches to the many challenges facing the world.

Nnamdi Kanu reacting to the absenteeism of the Nigeria president or a live message in an article he titled ” HOW IPOB CAGED THE MASK WEARER (JUBRIL THE SECOND) IN ASO ROCK” Said:

“The moron the morons call their president can no longer appear live even on common internet video link when addressing the UN because he doesn’t exist.”

“You can now see that we IPOB has been right all along. Facebook app & AFP Fact Check can you now accept that you have been deceiving people with your lies over the hyper-realistic mask wearer in Aso Rock?”

“President of the UN General Assembly, Excellencies, Distinguished Ladies and Gentlemen at the United Nations please welcome the prerecorded, yes ohhh….prerecorded address from the make-believe Buhari’s (Jubril II) address to the world. Niggerians and some moronic Igbo Efulefus shame on you.”

“We are always right. Presidency by deep fake videos and photoshopped pictures. If Buhari is alive bring him out to address the UN Live; bring him out to field questions from journalists. No more prerecorded videos.”

“Look at his fresh hands . I challenge Facebook and AFP to show us the hands of any other 80 year old in the world that looks as young as these ones they claim is Buhari’s.”