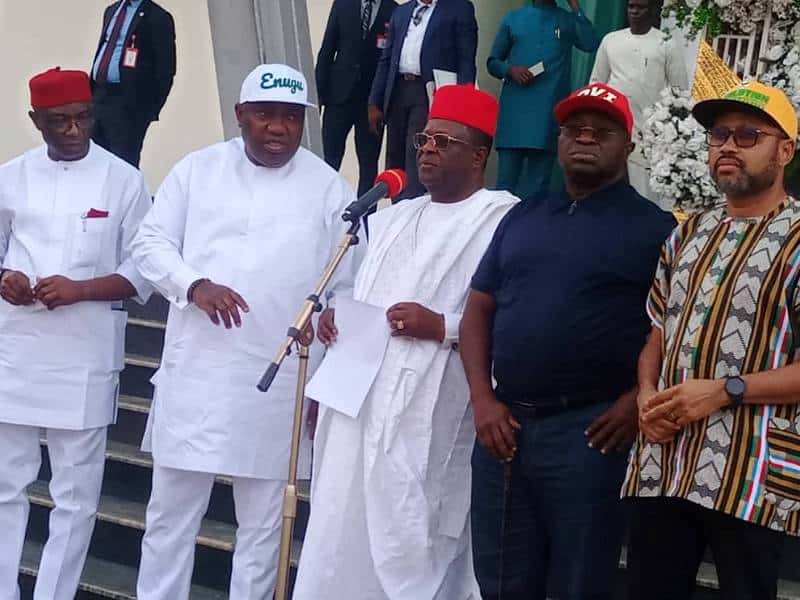 The South East Governors Forum has denied the claim by the Presidential candidate of the Labour Party, Peter Obi, that it established the Eastern Security Network (ESN).

Naija News reports that Obi had in an interactive session with the Joint Arewa Committee in Kaduna some weeks ago, erroneously said the South East governors set up ESN to curb insecurity in the region. In a communique issued at the end of its meeting in Enugu State on Sunday, the Chairman of the forum and Governor of Ebonyi state, Dave Umahi, said the Governors formed Ebubeagu and Forest Guards and not the ESN. Umahi said ESN was formed by the leader of the proscribed Indigenous People of Biafra (IPOB), Nnamdi Kanu. He said: “South East Governors Forum jointly formed Ebubeagu and Forest Guards, not ESN. So, it is not correct for any person to allude to the fact that South East Governors created ESN.” Umahi disclosed that the governors have agreed to form and fund a joint security patrol on all major highways in the region. The Ebonyi Governor said the operation which will kick off in December would curb the escalated insecurity in the region. He said: “South East Governors decried the state of insecurity in the region. Our economic activities have come to a halt while kidnapping and wanton killing have become the  order of the day. Southeast Governors call on the Federal Government to come to our aid in providing security in the zone bearing in mind that elections are around the corner. “Meanwhile, South East Governors have agreed to set up a 24-hour Joint Patrol on all major  highways within the South East, especially during the Christmas season.” The meeting was attended by Enugu State Governor, Ifeanyi Ugwuanyi (host), Governor Okezie Ikpeazu of Abia State and Ebonyi State Governor/Chairman of the South East Governors Forum, Engr. David Umahi. While the Governors of Anambra and Imo states, Prof. Charles Soludo and Senator Hope Uzodinma were represented by their deputies, Dr. Onyekachukwu Ibezim and Prof. Placid Njoku, respectively.