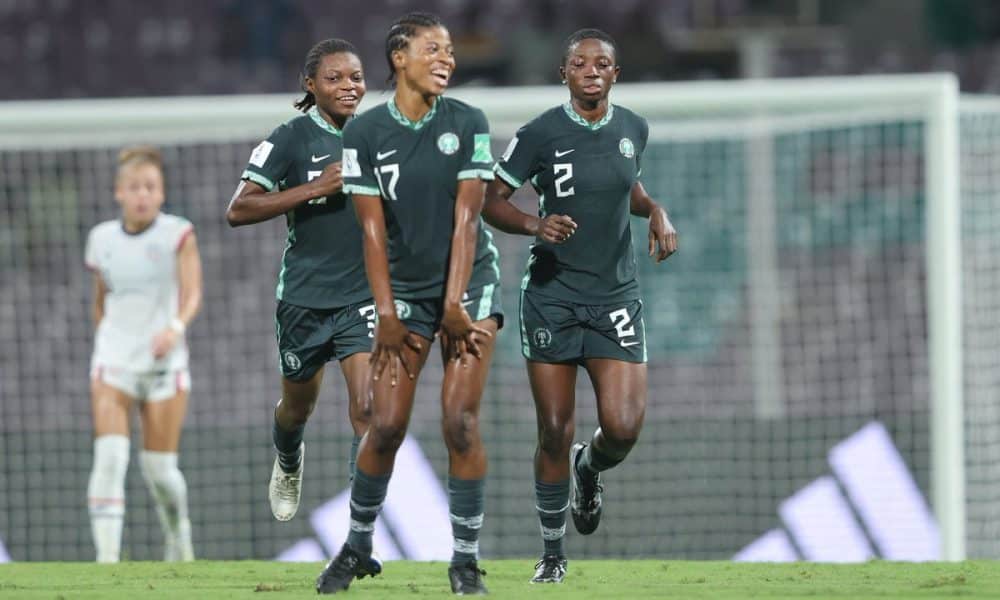 The Nigerian Flamingos defeated Germany to claim the bronze medal at the under-17 Women’s World Cup in India.

The Nigerian girls, including their Substitute Etim Edidiong, made several goals and attempts in the opening minutes of the game. But as they tie all three goals in less than 30 minutes, the Germans proved to be a tough nut to crack. Amina Bello attempts a long-range shot early in the game, but German goalkeeper Eve easily gathers it. Steiner gave the Germans an edge, but the advantage was reversed after a VAR review due to a foul on goalkeeper Faith Omilana. Opeyemi Ajakaye’s brilliant opening goal for the Flamingos ends her goal drought as the team battled to contain the Germans’ onslaught. Amina Bello almost doubled the lead for the Flamingos with a close-range effort, and two minutes from halftime, she scores with a spectacular header to double the advantage. Etim Edidiong, a substitute, scored the third goal for the Flamingos. A few minutes later, she nearly scored her second goal and the fourth for the team, but she was ultimately stopped. Things changed when the relentless Germans fired their energy to attack after Bankole Olowookere’s girls had already fully secured winning the Bronze medal for Nigeria. In the 73rd minute, Jella Viet’s goal and Platiner Paulina’s late goal give the Germans a chance to get back into the game. A few minutes to the end of the game, Loreen Benders levelled the goals for the Germans to force the Nigerians to a straight-penalty shootout to establish who is in charge. The Flamingos won 3-2 on penalties to take third-place bronze and became the second African team to accomplish this.