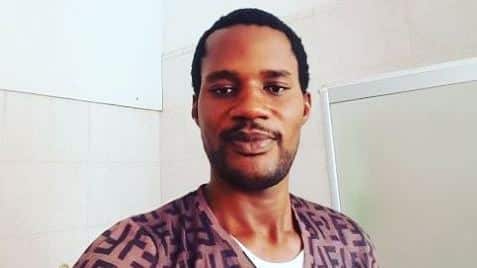 Nigerian filmmaker, Seun Egbegbe, the ex-lover to Toyin Abraham, on Sunday, stormed Church after his release from prison.

Naija News earlier reported that after spending six years and eight months in prison custody, Seun on Wednesday, October 12, 2022, was set free by a Federal High court in Lagos. Egbegbe was remanded on February 10, 2017, after allegedly obtaining money by false pretence from no fewer than 40 Bureaus De Change (BDC) operators in different parts of Lagos over a period of two years between 2015 to 2017. A video which emerged online, captured the ex-lover of Toyin, walking out of a church in an undisclosed location.

The video sparked mixed reactions online as some Nigerians expressed displeasure over the person that filmed Seun saying that he should be allowed to heal while some still claim he might not have changed his lifestyle. _mmesomachukwu wrote: “People in church should sha be careful with their bags and wallets..” stanbnx wrote: “Freedom Is priceless, Only God know how happy this man is right now.” ambpetertobyo wrote: “If he truly has repented, may God restore to him all that he has lost in this approx 4yrs behind bars” bimz_models wrote: “We are all human and no one is perfect let us not use the word of our mouth to send him into committing suicide coz a lot are ready to condemn him again Peace let him live in peace please” mo_bhola wrote: “God will permanently remove stealing from your eyes in jesus name” girllikeprincess_ wrote: “I hope he is not trying to distract people from his next move” harmeynatt wrote: “All those making fun of this man, will you be happy if he goes into depression? He must have gone through alot and trying to be a better man. When a man falls, don’t laugh but learn” holla_glamour wrote: “Please Let him enjoy his freedom & redemption in peace. Chai, GOD have mercy on this generation. Must you always delight in people’s mess even when they seem to be over it?” unlimitedeniola wrote: “No one is beyond redemption. I hope he gets better and come out stronger as a better person” zidanethebunny wrote: “Someone can’t go to church in peace again. We’ll soon start banning people from bringing phones to church.”