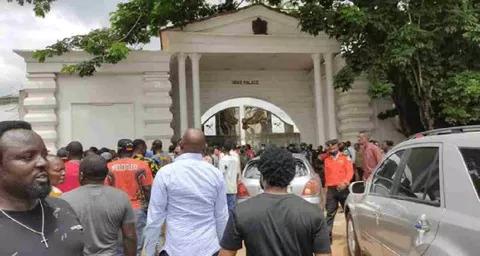 Many were reportedly injured and vehicles destroyed after supporters of Nigeria’s two major political parties clashed on Saturday at the Palace of the Oba of Benin in Edo State.

They visited the Royal Majesty ahead of the flag-off of the PDP’s governorship campaign in Benin City for the September 19 governorship poll in the State.

Immediately the governors left, some thugs reportedly started singing solidarity songs for and against governor Obaseki and Pastor Osaigie Ize-Iyamu – governorship candidate of the All Progressive Congress (APC) – at the exit gate of the palace.

Tempers quickly flared, leading to some thugs resorting to the use of weapons, including firearms, cutlasses and others, and in the process, several persons were reportedly injured, with many cars parked at the front of the palace badly damaged.

According to The Sun, the thugs shot sporadically into the air for minutes before they were dispersed by police officers keeping guards at the entrance to the palace.

Poles bearing the PDP umbrellas and their logos lined up along the Airport road were torn to shreds.

Reacting to the incident, ‎the Edo State Media Campaign Council of the APC accused Governor Obaseki and the PDP of unleashing violence on the people in Benin City.

The Chairman of the Media Campaign Council, Mr John Mayaki, alleged in a statement that the Governor had instructed his supporters to attack the people in a tit-for-tat for their alleged public booing of his arrival.

“It is sad that Mr Godwin Obaseki, the outgoing Governor of Edo State, has, today, Saturday, July 25, displayed the same traits of intolerance and penchant for violence that made the people of Edo State unanimously reject him.” the APC statement read.

“Booed by the people at the entrance of the Palace of our great Oba for handing the State to the PDP tax collectors who are unconscionably feasting on our collective patrimony, Mr Godwin Obaseki, as an act of revenge, instructed the thugs and cultists he has spent the past few weeks recruiting in the State and beyond to attack the people with dangerous arms,” it added.

Many were reportedly injured (C) The Sun
However, in a statement, the Special Adviser to Governor Obasekion on Media and Communication Strategy, Mr Crusoe Osagie, said the thugs were sponsored by the APC, Osagie Ize-Iyamu and the sacked National Chairman of the APC, Adams Oshiomhole.

“We are appalled by the deployment of thugs to the sacred grounds of the Oba Palace by the APC, Ize-Iyamu and Oshiomhole to harass guests who are in the State for the flag-off of Governor Obaseki’s campaign and had visited the palace to pay obeisance to His Royal Majesty, Omo N’Oba N’Edo Uku Akpolokpolo, Oba Ewuare II, the Oba of Benin.

“While we respect the boundaries of politics as it relates to the Palace, it is reprehensible that the APC, its candidate and their enablers would sponsor thugs to desecrate the palace, which is a clear case of desperation to score cheap points,” Mr Osagie said.

Governor Obaseki, speaking at the campaign venue – at the Lawn Tennis Court of the Samuel Ogbemudia Stadium – alleged that an APC billionaire had hired thugs to carry out the attack, adding: “They want to scare us”.