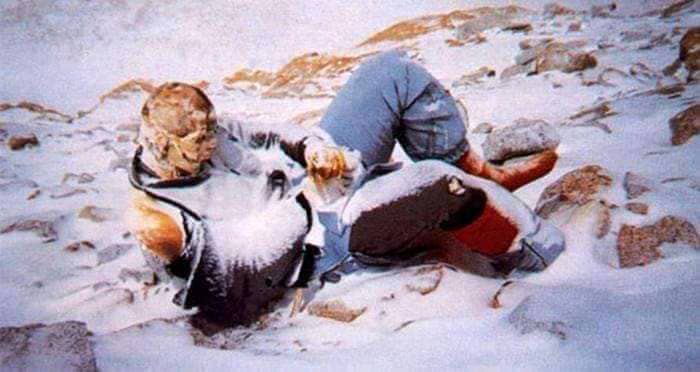 Did you know there are several bodies located at various points on Mount Everest? it’s simply too difficult and dangerous for authorities to remove the bodies. so they are left there, they serve as markers for the climbers and also warnings to remind climbers how unforgiving the mountain climate can be. However, some the corpses have become quite famous amongst climbers and have earned themselves nicknames

Green boots- sadly green boots has never officially been identified but he is believed to be Tsewang Paljor, an Indian climber who died on Everest in 1996. The term Green Boots originated from the green Koflach mountaineering boots on his feet.

David Sharp was attempting to summit Everest on his own. He had stopped to rest in Green Boots’ cave, as so many had done before him. Over the course of several hours, he froze to death, his body stuck in a huddled position. at least 40 people passed by Sharp that day and saw that we were in distress. Not one of them stopped.

George Mallory’s corpse was found 75 years after his 1924 death. Mallory had attempted to be the first person to climb Everest, but he disappeared before anyone found out if he had achieved his goal. His body was found in 1999, his upper torso, half of his legs, and his left arm almost perfectly preserved

Hannelore Schmatz she came the first German and first woman to perish on the mountain. Schmatz had actually reached her goal of summiting the mountain, before ultimately succumbing to exhaustion on the way down. Despite her Sherpa’s warning, she set up camp within the death zone.

Francys Arsentiev became the first woman from the United States to reach the summit of Mount Everest without the aid of bottled oxygen, on May 22, 1998. She then died during the descent. n the morning of May 23, Francys Arsentiev was encountered by an Uzbek team who were climbing the final few hundred meters to the summit. She appeared to be half-conscious, affected by oxygen deprivation and frostbite. As she was unable to move on her own, they attended to her with oxygen and carried her down as far as they could, until, depleted of their own oxygen, they became too tired to continue the effort. Francis was still alive.

there are around 200 bodies on Mount Everest