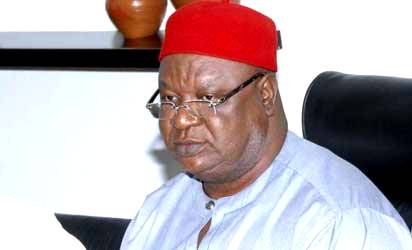 A former Secretary to the Government of the Federation, Chief Anyim Pius Anyim, on Tuesday, urged South-East governors and Igbos to invest in the five states of the zone for it to be further developed.

The theme of the Summit is entitled: “Ibu Anyi Danda“ meaning the magic of togetherness and common purpose.

Anyim said the governors and the citizenry should come together to invest in and develop the region.

He said the unity of purpose with shared motivation, benefit, and mutual survival would offer them the opportunity to pull their resources, talents, and ideas together for the benefit of the region.

Anyim urged them to emulate the late Premier of the defunct Eastern Region, Dr. Michael Okpara, who brought so many transformations and development to the area in the First Republic through industrialization and infrastructure.

He reminded the audience that after the assumption of office in 1960, Okpara was confronted with the challenge of uplifting the living standard of the people.

He said that with the support and collaboration of stakeholders in the region, Okpara was able to lift the plight of people through his government’s growth plan.

“At 39, he was able to invest in critical areas such as human capital development, industrialization, entrepreneurship, agriculture, and others, to stimulate the entire region.

While calling on South-East governments to provide industries, and infrastructure to develop the area, Anyim said despite the federal allocation to states, those in the region failed to harness the economic opportunities of the area.

Anyim noted that “visionary leaders“ such as Chief Jim Nwobodo and Chief Sam Mbakwe did wonders in developing Enugu and Imo states respectively through the provision of infrastructure and the setting up of industries.

He said that investors would have confidence if the governments took the first step of providing an insurance policy, protection, support, and infrastructure to make their investment successful.

On why Igbos were developing places other than theirs, Anyim said that leaders must create an environment that would complement the efforts of others.

“This complement is more practical in technological businesses. If you support me and I support you, we complement each other and together we can do anything,” he said.

Anyim, however, urged Igbos to develop their region by investing in it while the governments should provide a conducive environment and infrastructure for the area to thrive.